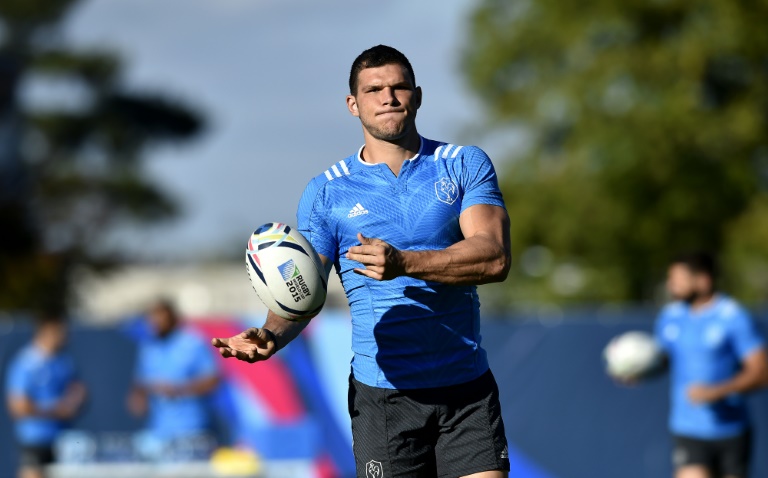 Remy Grosso stepped up his rapid rise from anonymity Tuesday when he was named in the France side to play Canada in their Rugby World Cup Pool D game on Thursday.

The 26-year-old Castres wing, whose squad call-up to replace the injured Yoann Huget surprised even Grosso, wins his first cap against a Canada side who showed sparkle in their 23-18 defeat by Italy on Saturday.

Grosso has only previously donned a blue jersey for the sevens side in the European qualifiers for next year’s Olympics in June.

“It was an honour and a superb experience to represent France at Sevens,” said Grosso.

“But I am a player of fifteen-a-side rugby and have been a supporter of the national team since I was a child and sang the ‘Marseillaise’ in front of the TV.

“This is on another level. This is something I have dreamed of achieving since I was a boy,” he added.

“For him, it is an exceptional adventure,” said coach Philippe Saint-Andre after announcing the team seeking a third successive win.

“A few weeks ago he would not even have been thinking of the World Cup.

“Now he is in the first team. Now it is for him to prepare for the game without putting pressure on himself and he plays his normal game out there.”

Saint-Andre, who is building towards the decisive pool match against Six Nations champions Ireland, also gives fullback Brice Dulin another try on the wing after a disappointing performance in the unfamiliar position against England before the tournament.

Dulin, who will win his 22nd cap, has found it impossible to dislodge South African-born Scott Spedding from the fullback spot. And with Fijian-born wing Noa Nakatici rested after playing in the wins over Italy and Romania the Racing92 man gets another chance.

“He has started to adjust to the differences between the two positions since we started working with him on those,” said Saint-Andre.

Saint-Andre has also recalled several of his first choice players for the rugged challenge that Canada will provide.

Thierry Dusautoir returns to captain the side with the halfback partnership of Toulon duo, scrum-half Sebastian Tillous-Borde and kicker Frederic Michalak also back in the frontline.

The mercurial Michalak could pass a personal milestone if he scores four points he will become France’s all-time World Cup scorer passing Thierry Lacroix’ mark of 124.

Saint-Andre, though, rested No8 Louis Picamoles, who like Nakaitaci played in both of the pool matches so far.

France play Ireland on October 11 with the winner likely to top the table and avoid the defending champions New Zealand in the last eight.