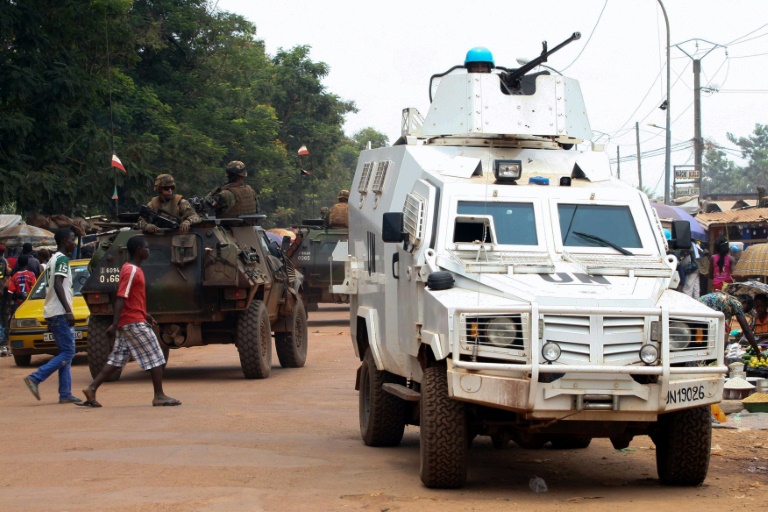 Tension and fear on Monday gripped Bangui, the capital of Central African Republic, with the city’s main streets closed by barricades after a spate of violence, looting and the death of three protestors.

A hospital source told AFP on condition of anonymity the three were killed and seven were injured on Monday when UN peacekeepers opened fire as several hundred protestors headed for the presidency. The UN mission issued a denial.

The demonstrators were demanding the resignation of interim leader Catherine Samba Panza after the deaths of at least 20 people in Bangui at the weekend. She was in New York attending the UN General Assembly session.

The shooting was also seen by a witness, who spoke to AFP, also on condition of not being named.

“MINUSCA peacekeeping officers deny (reports) that they opened fire on the population,” the mission said in a brief statement sent to AFP.

“That said, MINUSCA remains concerned by such allegations and will proceed to verifying them,” it added.

After the break-up of the protest, shooting broke out elsewhere in the city where a teenager was killed after being hit by a stray bullet, added the hospital source.

With barricades raised across the city Monday, French and UN peacekeepers were on watch at key points after weekend trouble triggered by the killing of a motorcycle-taxi driver.

Few vehicles ventured out onto the roads and most shops remained shuttered throughout the day amid fears of a new episode of the Muslim-Christian violence that has riven the country.

“The (military) gendarmerie, the defence ministry and state radio all came under attack during the night by armed individuals,” said a Central African army source who asked to remain anonymous.

“The attacks were repulsed, causing some fatalities amid the assailants,” added the source, without providing further details.

Protestors threw up barricades in several parts of the city on Sunday, which were destroyed by police but subsequently re-built.

The trouble in the already restive impoverished nation led Prime Minister Mahamat Kamoun to slap a curfew on the city.

Medical sources have said that in addition to the more than 20 dead, around 100 people were wounded in violence on Saturday.

A spokesman for the European Union’s foreign service appealed Monday night for an end to attacks on civilians.

“Attacks on the civilian populations and the targeting of humanitarian workers whose aim is to deliver lifesaving aid must stop immediately,” the statement said.

“The overwhelming majority of citizens of the country deserve and demand an end to conflict and division between communities for the country’s prospects for peace and recovery,” it added.

Bangui’s latest round of violence was sparked by the murder of a motorcycle-taxi driver in central Bangui’s Muslim-majority PK-5 neighbourhood.

After the death of the driver, whose throat was allegedly slit, clashes and looting spread to nearby districts.

On Monday evening, prisoners held in Ngaragba jail — most of them so-called “anti-balaka” Christian fighters — escaped, a military source said.

The PK-5 area was the centre of killings between Christians and Muslims in the city in late 2013 and early 2014 that raised the spectre of a wholesale bloodbath.

It remains the last bastion for Muslims hounded from other districts by anti-balaka fighters.

French soldiers and UN peacekeepers remain in the former French colony, where thousands of people died in the violence and hundreds of thousands remain displaced from their homes.

His ouster triggered the worst crisis since independence in 1960, and the country since has remained prey to violence between Seleka fighter and Christian militias known as the “anti-balaka”, or anti-machete.

Although unrest has abated considerably, armed groups still operate in some parts of the country.

Presidential and legislative elections are due to be held by the end of the year, but they have already been pushed back several times as the country continues to grapple with the crisis.

Pope Francis is due to travel to Bangui on November 29 and 30, the last stop on an African tour.