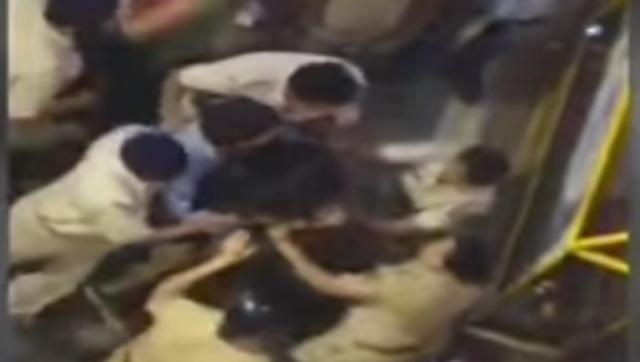 Mumbai: A CCTV footage showing 5-6 policewomen dragging a young girl at the pandal of Lalbaugcha Raja in Mumbai went viral leaving the viewers in shock and disgust.

The video displayed inhuman behaviour by the women police who ganged up to mercilessly beat up a young girl from Mira Road. The policewomen deployed at the pandal dragged the young girl from the queue and simultaneously punched and slapped the lady.

Reports suggested, the girl was from Mira Road and just like thousands of Lord Ganesha’s devotees; she made her way in the front to get a glimpse of the deity.

Meanwhile, police has ordered an enquiry into an alleged manhandling of two women. Maharashtra chief minister Devendra Fadnavis also sought a clarification from Mumbai Police on the incident.

“An assistant commissioner of police rank officer is probing the incident which occurred on Friday night. Investigation is on pertaining to the exact reason,” said a police officer.

Police sources said the exact reason behind the brawl was still unclear.