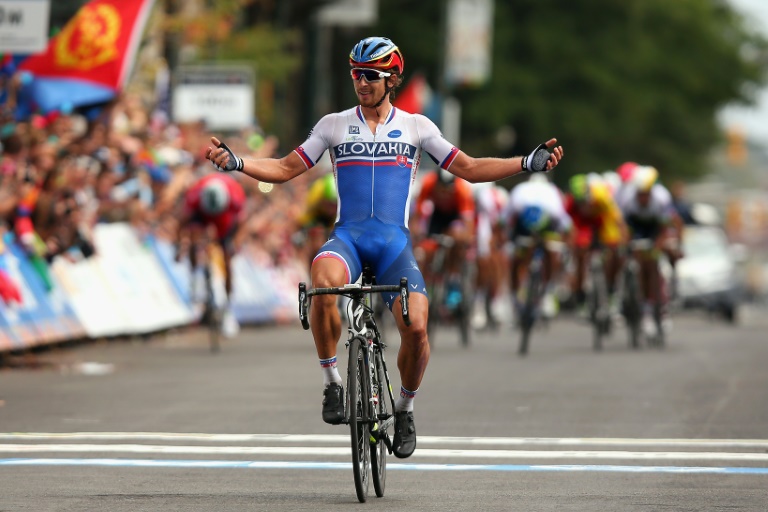 Slovakia’s Peter Sagan charged ahead over the last climbs and hung on at the finish to win Sunday’s men’s road race at the World Road Cycling Championships.

On a cool day when predicted rain barely fell, Sagan hardly featured among those at the front until it mattered most.

“I did just one attack,” Sagan said. “But I think it was the right attack.”

Sagan charged up the final cobblestone climb past Belgium’s Greg Van Avermaet and sped alone into the lead with around 2km remaining, unwilling to risk attacking earlier with only two compatriots against much larger squads.

“I said, ‘Yeah, I’m going to try.’ It was a good decision,” Sagan said. “When I decided to go, even alone, it was the best moment. When I was alone after the cobblestones, that was the crucial point.”

After battling up the final climb with the peloton closing, Sagan could see the finish but was struggling.

“From the last climb, it was still a long way to the finish. The last 800m was very tough,” he said. “It was far away, but I said I had made my move and I have to go.

“The best defense is attack.”

Sagan outsprinted his fast-closing foes to the line and tossed his helmet into the crowd in the euphoric moments after his victory.

After a season filled with runner-up stage finishes, five in the Tour de France alone, Sagan was philosophical about his big win.

“If I change all the seconds for firsts, there’s not a team that can pay me,” he said. “I still can’t believe I crossed the line first.”

Sagan also called for European leaders to find solutions to the region’s ongoing refugee crisis, saying, “It’s important for the problems in Europe now. I want to tell people thinking about the future they have to change something.”

Matthews charged but found no help in chasing down Sagan late and settled for outracing the others to the line.

“It was heartbreaking to see the rainbow jersey ride away like that,” Matthews said. “I came here to win the gold medal and I had the legs to do it. I was disappointed coming in as a favorite and coming up second.”

The Aussie avoided attacking on the final climb, hoping a rival would press the fight to close the margin. Instead, others waited with him and Sagan kept his margin.

“He got a bit of a gap. Everyone seemed to follow me and wouldn’t go after him,” said Matthews. “I wanted to attack other spots, not on the climb. I think it was worth the risk there to try and stay back and let someone else close the gap but unfortunately no one else did.”

Norway’s Alexander Kristoff, third at the 2012 Olympics, was fourth, just ahead of Spain’s Alejandro Valverde, twice a runner-up and third four times before.