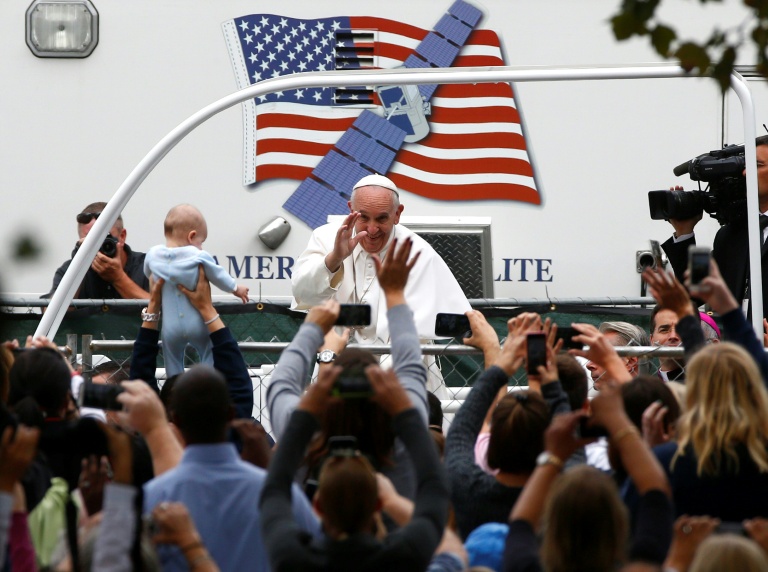 Pope Francis celebrated an open-air mass at the culmination Sunday of an historic tour of the United States that electrified Americans with a message to respect immigrants, protect the environment and help those in need.

For the duration of his nine-day tour, everywhere he went in Cuba, Washington, New York and Philadelphia, enormous crowds lined the streets, cheering his name in a nod to his global stature and moral authority.

Met personally by President Barack Obama on the tarmac in Washington, he became the first pope to address US Congress, calling on elected leaders to take responsibility for crafting a fairer economic system, confronting global warming, restricting the arms trade and abolishing the death penalty.

In New York, he led a multi-faith prayer for world peace at Ground Zero, testament to the September 11, 2001 attacks killed nearly 3,000 people, a place that he said “speaks so powerfully of the mystery of evil.”

In Philadelphia, the Vatican said more than a million people poured onto the streets to watch his farewell mass — more than double the number who turned out to attend a service led by John Paul II in 1979.

“I think what Francis is doing, he’s trying to make people see that the church is really for everyone,” said pilgrim Sandy Fuga, a retired Catholic teacher who sat on the Benjamin Franklin Parkway in Philadelphia.

The rare criticism that did Francis elicit was the omission — from his public agenda at least — of a meeting with victims of pedophile priests, but on Sunday he met privately with five adults abused as children.

“God weeps,” the pope told a gathering of bishops afterward, pledging to hold accountable all those responsible.

“I remain overwhelmed with shame that men entrusted with the tender care of children violated these little ones and caused grievous harm. I am profoundly sorry,” Francis said.

Around 6,400 Catholic clergy have been accused of abusing minors in the United States between 1950 and 1980, although campaigners fears that the number could be higher.

But many Americans who camped out to catch a glimpse of Francis credited him with rejuvenating a Church still reeling from the scandals, declining attendance records and falling numbers joining the priesthood.

His relatively reform-minded approach to social issues — refusal to judge gays and lesbians including priests — his humility and love for the most vulnerable, has struck a chord across the country’s racial and socioeconomic divide.

Among the crowds there were non-Catholics, Christians of other denominations and followers of other faiths drawn to his universal messages of love and his teaching by example.

On an exhausting schedule, it was meeting the disadvantaged — immigrant school children in New York, the homeless in Washington and prisoners in Philadelphia — that he seemed most animated.

He kissed babies hoisted up by security agents. Upon arrival in Philadelphia, he stopped his modest Fiat 500 to bless a disabled son in a wheelchair pressed up against the barrier.

Manuel Portillo, 54, a Guatemalan immigrant who has lived in Philadelphia for 22 years, said he had never seen such enthusiasm in the city.

“I followed every step of the pope’s visit, and I think he made fantastic remarks on Cuba and immigration,” he said.

In Cuba, he urged the country to continue down the path of reconciliation, fresh from helping broker dialogue between Havana and Washington, which led to the resumption of diplomatic ties.

At the Curran-Fromhold Correctional Facility, the largest prison in Philadelphia, he shook hands and offered kind words to around 100 inmates.

“All of us are invited to encourage, help your rehabilitation,” he said, in a country that has the largest prison population in the world, and where there is ongoing debate about criminal justice reform.

But in America he was perhaps most constant and firm on immigration, a hugely divisive topic in the nascent 2016 election campaign.

The son of Italian immigrants, he has repeatedly reminded Americans of their immigrant roots and the values of the nation’s founding fathers.

But there were also moments of levity. Defending the traditional family in an off-script speech laden with jokes at a festival of families on Saturday, his remarks were lapped up by the faithful.

“Families quarrel and sometimes plates can fly and children bring headaches, and I won’t speak about mothers-in-law,” he said.

“But those difficulties are overcome with love,” he added — words of wisdom woven with a common touch that has endeared him to millions.