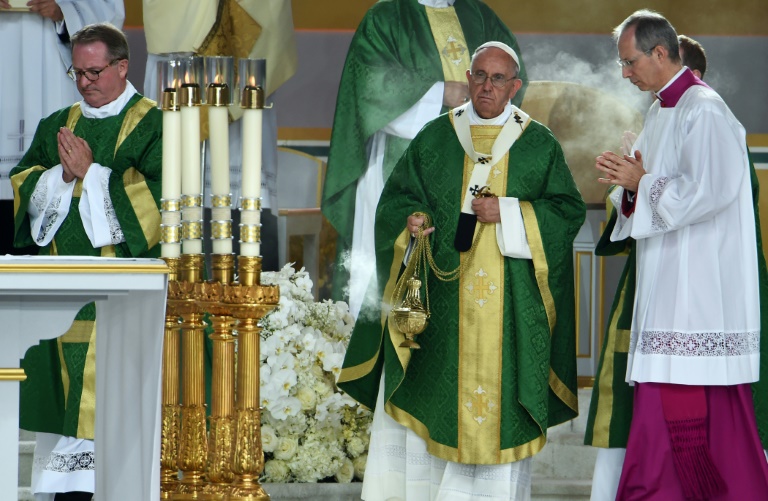 Pope Francis on Sunday celebrated the final mass of his US tour with an enormous crowd in Philadelphia, after meeting victims of child sex abuse saying “God weeps” for their suffering.

He arrived at the giant open-air service after an extended tour by Popemobile, greeting the up to 1.5 million people expected to throng the streets of Philadelphia to catch a glimpse of the popular pontiff.

Babies and disabled children were handed over to security agents to be hoisted up for a kiss from the head of the world’s 1.2 billion Catholics before being passed back to overjoyed parents.

Catholics from across the world, around America and members of the wider public poured onto the Benjamin Franklin Parkway for the mass, which the pope is leading outside the Philadelphia Museum of Art.

“It’s a once in a lifetime opportunity,” said Julian, who travelled from the northeastern state of Rhode Island. “It’s something I can tell my kids one day, my grandkids and just enjoy the moment.”

It caps an exhausting but exhilarating maiden visit to the United States by the 266th head of the Catholic Church. Francis arrived from Cuba, where he urged the country to continue down the path of reconciliation.

Fresh from helping broker dialogue between Havana and Washington, which led to the resumption of diplomatic ties, Francis was welcomed personally by President Barack Obama at the airport and then at the White House.

At every step of the way — in Washington, New York and Philadelphia — he has been greeted by cheering crowds of Catholic faithful and those drawn to his message and his humility.

The rare criticism Francis had elicited during his six days in the United States had clung on the omission — from his public agenda at least — of a meeting with victims of pedophile priests.

The Vatican released a statement saying he met privately St. Charles Borromeo Seminary with three women and two men who were sexually abused as children by members of the clergy, family members or teachers.

“God weeps,” the pope told a gathering of bishops afterward. “The crimes and sins of the sexual abuse of children must no longer be held secret.”

“I remain overwhelmed with shame that men entrusted with the tender care of children violated these little ones and caused grievous harm. I am profoundly sorry,” Francis said.

“I pledge the zealous vigilance of the church to protect children and the promise of accountability for all.”

He then visited the Curran-Fromhold Correctional Facility, the largest prison in Philadelphia, shaking hands and offering words of comfort to around 100 carefully selected inmates.

In a country that has the largest prison population in the world, the pope told inmates from a podium that their time of incarceration could have only one purpose: rehabilitation and paving their return to society.

It is during meetings with the disadvantaged that Francis has appeared most at ease on a punishing schedule.

“All of us are invited to encourage, help your rehabilitation,” he said, before walking down the lines of seated inmates dressed in blue prison scrubs, shaking their hands and offering private words of comfort.

“The chair is beautiful. Thank you very much for the hard work,” he said to applause.

In America, the pope has been perhaps most constant and firm on immigration, a hugely divisive topic in the nascent 2016 election campaign.

The son of Italian immigrants, he has repeatedly reminded Americans of their immigrant roots and the values of the nation’s founding fathers.

In a historic address to Congress, he called on politicians to take responsibility for crafting a fairer economic system, confront global warming, restrict the arms trade and abolish the death penalty.

All these positions are at odds with the conservative wing of the Republican Party but criticism of his speech has been moderate.

He also defended the traditional family and called on societies to allow young couples to start a family and have children.

“Families quarrel and sometimes plates can fly and children bring headaches, and I won’t speak about mothers-in-law,” he said in an off-script speech laden with jokes lapped up by families in Philadelphia.

“But those difficulties are overcome with love,” he said in words of wisdom woven with a common touch, a style that has endeared him to an audience beyond the Catholic church.