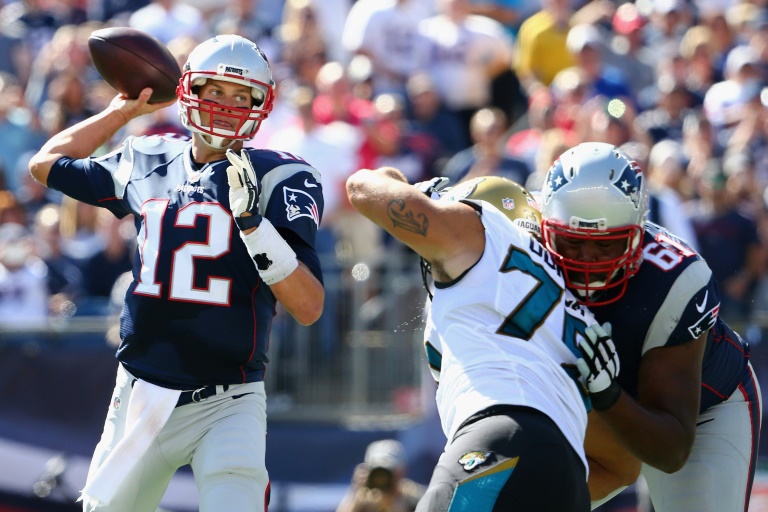 Tom Brady racked up another milestone in his glittering NFL career on Sunday as the New England Patriots thrashed the Jacksonville Jaguars 51-17 to maintain their perfect start to the season.

Four-time Super Bowl champion Brady, a man on a mission this season after successfully challenging his four-game ban over the ‘Deflategate’ saga, became only the fourth quarterback to throw 400 touchdown passes in NFL history.

Brady added his name to an illustrious list which previously included only Peyton Manning, Brett Favre and Dan Marino when he connected with wide receiver Danny Amendola for a one-yard touchdown pass in the first half.

Brady also threw his 401st touchdown pass for good measure as the Patriots piled up 471 yards of offense, tied a franchise record of 35 first downs and scored on all nine occasions they had the ball.

The 38-year-old, who also equaled the number for record appearances for the Patriots in his 212th game, later played down his personal contribution.

“I’ve always said I don’t care whether we run it in or throw it in as long as we score points, and we’re and winning it makes it fun for me.”

Patriots coach Bill Belichick paid tribute to the performances of Brady and Gostkowski after their landmark performances.

“Durability, longevity and obviously consistent production that both of them have had,” Belichick said.

“I feel very fortunate to have coached, had guys like that on our team, and those two guys in particular … they had a good day, as they’ve had for many, many, many days in their career.

“Really fortunate to have those guys on our team.”

The victory saw the 3-0 Patriots cement their place at the top of the AFC East, where they lead the New York Jets who are 2-1.

But while Brady celebrated, it was a disappointing day for another of the NFL’s marquee quarterbacks, with Pittsburgh Steelers legend Ben Roethlisberger forced out of his team’s battling 12-6 win at St. Louis with a knee injury.

Roethlisberger was hurt late in the third quarter when Rams safety Mark Barron rolled into his lower leg on a sack.

The sack was the second on consecutive plays. Roethlisberger made it to the sideline under his own steam, but was taken to the locker room on a cart for further evaluation, and was declared out for the rest of the game.

Steelers head coach Mike Tomlin had little information on Roethlisberger, except to say he was “being evaluated” and would have an MRI after returning to Pittsburgh.

The match at St Louis had earlier been delayed when artificial turf at the Rams’ domed stadium caught fire amid a pyrotechnic display.

Elsewhere Sunday, the Cincinnati Bengals piled on the pressure for divisional rivals Baltimore with a 28-24 to tighten their grip on the AFC North.

The win left the Bengals with a 100 percent 3-0 record while the Ravens are now marooned on the bottom after three defeats.

Before Sunday, Baltimore had been the only NFL franchise never to start 0-3.