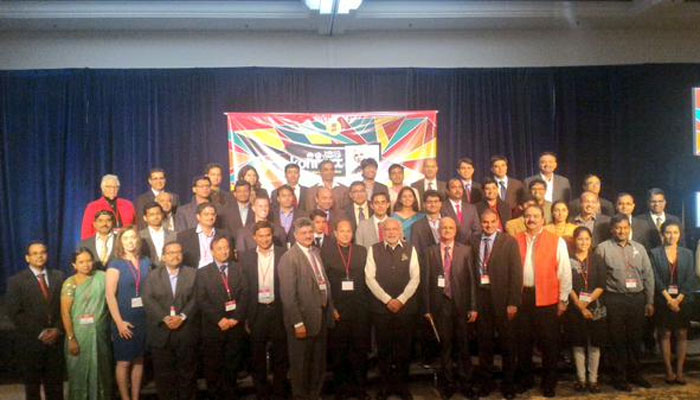 San Jose: Prime Minister Narendra Modi emphasized on the importance of start-ups, saying that India has woken up to its potential and that he wanted to see the idea and spirit of start-ups, light up the economic and the fortune of rural India.

“The idea of start-ups is close to my heart. When I shifted to New Delhi last year, I thought of my government as a start-up, so I understood some of the bumps you faced on the road. I understand your challenges as well as the wonderful feeling of creating something new. The course of human history and progress has been shaped by imagination, inspiration, invention and innovation,” Prime Minister Modi said while addressing the ‘India-U.S Start-up Konnect’ event here.

“I often say if there is a strong wind blowing, some will shut the window and some will set up a windmill or launch their sails on the sea,” he added.

Praising the Silicon Valley for their creative eco-system and innovation, Prime Minister Modi said that no other community in the world puts in as much effort in saving the world as California’s technology centre does.

“Start-ups have always been the engine of progress. The mega corporation of today were the start-ups of yesterday. The digital age has created a fertile environment for start-ups,” he said.

Speaking on the impact and importance of start-ups in India, the Prime Minister said that he saw start-ups, technology and innovation as an exciting and effective instrument for India’s transformation and for creating jobs for the youth.

“India’s own eco system of start-ups is evolving rapidly. It is driven by the energy, enterprise and innovation of our youth. We have a huge market with rapid growth and untapped opportunity in every sector. We have institutions, incentives and interest in new ventures. India has woken up to the potential of start-ups with enthusiasm and energy,” he said.

“We are a nation of 800 million youth below the age of 35 years and they are eager for a change. They have the energy and drive to pursue and the confidence for achievement. When each of the 500 odd town’s produces start-ups and the 600,000 villages produces six small businesses on a regular basis, we will create an enormous economic momentum and a huge number of jobs in our country,” he added.

Praising Indian start-ups, the Prime Minister said that they represent not just commercial success stories but are powerful examples of social innovation and that the pace at which Indians are taking to digital technology defies their stereotypes of age, education, language and income.

He also emphasized on the importance of his ‘Digital India’ initiative on the global scale.

“The scale of India’s development is huge and the need to achieve is urgent. You cannot simply continue in the traditional path of development and this is the vision and the spirit behind ‘Digital India’. Start-ups will have an important role in achieving our vision. From creating to infrastructure to providing service, from product manufacture to human development as well as promoting digital literacy, ‘Digital India’ is a large cyber opportunity for the world,” the Prime Minister said.

He spoke of the new schemes that were launched today giving weightage and prominence to start-ups.

“I am honoured to launch the BHARAT Fund today – which stands not just for India, but also for better health, agriculture, renewable energy and technology. The next one is the Atal Innovation Mission- in honour of former prime minister Atal Bihari Vajpayee to promote innovation. Another is SETU (which means bridge in Hindi) – Self Employment and Talent Utilisation (SETU). This will be an incubation and facilitation programme,” the Prime Minister said.

He also said that the Indian Government is making digital infrastructure and service affordable that will bring broadband to 600, 000 villages and free Wi-Fi to schools, universities and public places.

Also, a fund of $150 million will be given for start-ups in India.

The Prime Minister said that Silicon Valley had been the ‘natural choice’ to launch India’s new digital endeavours.

“I’m told that Indians account for 15 percent of start-ups here. 100 of our professional start-ups are contributing to successful American enterprises. This is the potential of youth and innovation. India and the US have a natural partnership of innovation and technology that has shaped the knowledge economy,” he said.

LinkedIn cofounder Reid Hoffman speaking at the event said what Prime Minister Modi is doing in terms of digital India is a mark of great leadership.

He further said the key success of Silicon Valley is not Startups but scaleups.

Honour to be here today. Entrepreneurship is key to how new technology is developed: @reidhoffman, @LinkedIn at start-up programme

An catalyst for the future. The unique #IndiaUS exhibition of Start Ups showcases products from 40 diff companies pic.twitter.com/Fm4QxRsoKV

Modi had a photo-op moment with the exhibitors at the event before taking a tour of the stalls.