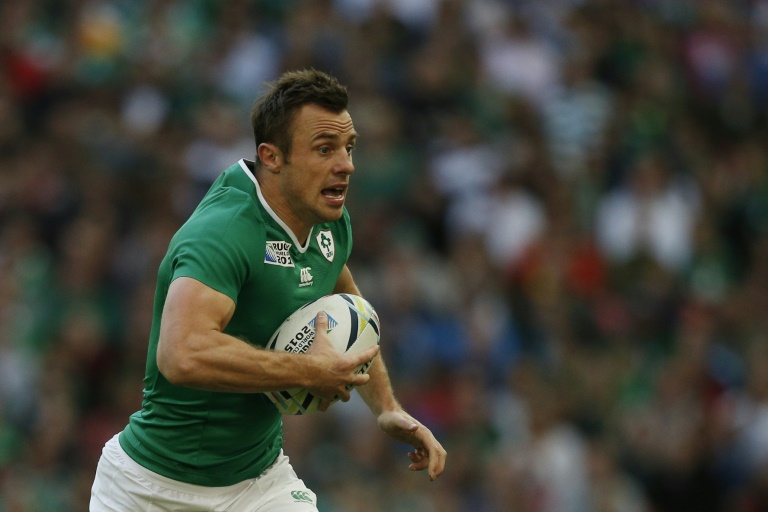 Veteran Irish wing Tommy Bowe hopes his two tries in the 44-10 World Cup win over Romania has helped put him in pole-position for a starting place against Italy.

The 31-year-old Ulster star — whose brace took him to 30 Test tries and second on the Ireland all-time list behind retired icon Brian O’Driscoll — admitted he had needed to shine.

A below-par game against England in a warm-up Test included being humiliated as he was used as a stepping ladder in by try-scorer Jonny May during the 21-13 loss earlier this month.

As a result he failed to make the starting line-up for the Six Nations champions’ opening World Cup Pool D game against Canada — which the Irish won comfortably 50-7.

“I was disappointed,” said Bowe on Monday referring to being omitted from the line-up for the Canada game.

“I would normally be relatively consistent with my performances, but that day (against England) was definitely one of the more difficult ones.

“But I bounced back (against Romania) and put it behind me relatively early.

“I was excited to get back on the pitch again after you put in a performance not the way you want to play.”

Bowe, who scored a try in the 2009 Six Nations Grand Slam clinching match against Wales, said he hoped he had done enough to line-up for next Sunday’s clash with Italy, where a win would see the Irish reach the quarter-finals.

“The competition for the back three places (wings and fullback) is something else.

“Myself, Keith Earls (man of the match against Romania and fellow wing who also scored two tries) played exceptionally well, Simon Zebo played well and Rob Kearney looked full of energy when he came on.

“There’s huge competition there and all I can do is put my hand up when I am given the opportunity.”

Bowe, who like several of the Ireland side honed his skills with a spell of Gaelic Football when he was a teenager, was especially effusive about Zebo’s display at fullback — he had a spectacular try ruled out and created two others.

The chances of the 25-year-old Munster back getting the nod have increased because Kearney limped off in the second-half and is due to undergo a scan to see how serious it is.

“Simon is pushing Rob (Kearney) hard for his place at full-back,” said Bowe.

“He is a very exciting player and he has showed that he is capable of doing the basics right. It shows that we have more than enough people to come in and do a good job for the team.”

Bowe, whose Irish grandfather won the Military Cross for bravery on D-Day in 1944, said Zebo and Kearney’s case was reflective of the whole squad where each position is being fought over.

“It’s a strong position to be in,” said Bowe, who in June married his long-time girlfriend Lucy Whitehouse, a former Miss Wales.

“As the games get tougher and as the weeks hopefully go on, there are going to be people who pick up knocks.

“Every player wants to give the coaches a headache.

“We all feel we are good enough to be playing week in, week out.

“There are two massive matches coming up (they play fellow Six Nations heavyweights France in the final pool game) in the next two weeks, so training will be very interesting this week.”