Home World Guess who dropped by during Modi-Hollande meeting 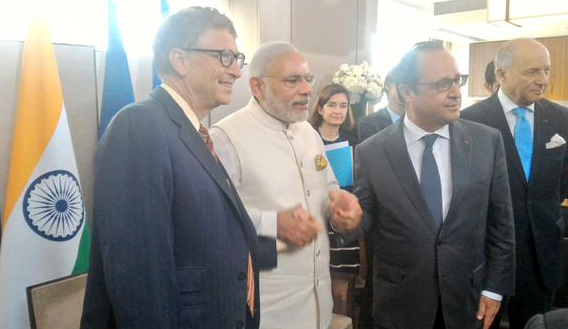 Prime Minister Narendra Modi got a surprise visitor on Monday when Microsoft co-founder Bill Gates dropped by during his bilateral with French President Francois Hollande.

Gates, who was not present at the meeting Modi had with technology leaders in San Jose over the weekend, dropped in while the Prime Minister was meeting Hollande at the UN.

The Bill and Melinda Gates foundation, the largest private foundation in the world, has a significant presence in India.

The foundation began its work in India a decade ago with an initiative to curtail the spread of HIV. Since then, its scope in India has expanded tremendously to include maternal and child health, health and nutrition services, vaccines and routine immunisation, family planning, agricultural development, sanitation, and the control of infectious diseases.