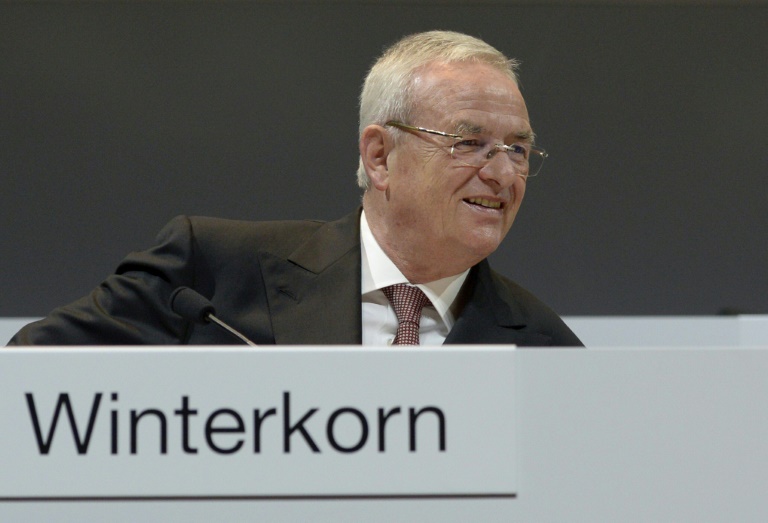 German prosecutors on Monday announced a criminal investigation against Volkswagen’s former chief executive as the government pressed the embattled auto giant to quickly resolve the pollution cheating scandal that has rocked the auto sector.

The affair will also be on the agenda when the EU’s 28 trade or industry ministers gather in Luxembourg later this week for the first high-level meeting in Europe on the VW crisis since it erupted last week.

In Germany, public prosecutors in the northern city of Brunswick said they have launched a criminal probe against Martin Winterkorn, who resigned as VW’s CEO after the group revealed that 11 million of its diesel vehicles are equipped with devices that fool official pollution tests.

In his resignation statement, the 68-year-old manager, a renowned perfectionist in the industry, said he was “not aware” of having done anything wrong.

The carmaker’s supervisory board also appeared to absolve him initially, insisting that Winterkorn — who as Germany’s highest-paid executive could under normal rules stand to pocket a payout of around 60 million euros — had not been aware of the fraud.

But prosecutors said they were looking to establish the exact chain of responsibility in the scam, which is snowballing into one of the biggest ever in the European automobile industry and threatening to tarnish Germany’s pristine engineering reputation.

“Following a number of legal suits, the public prosecutors in Brunswick have opened an investigation against Martin Winterkorn, the former chief executive of Volkswagen,” they said in a statement.

“The investigation will focus on the allegation of fraud by selling vehicles with manipulated emission values,” it added.

On Friday, VW announced it was replacing Winterkorn with the head of VW’s luxury sports car brand Porsche, Matthias Mueller.

The new 62-year-old boss faces daunting challenges as he seeks to steer VW out of the wreckage left by the affair.

On Monday, the German government said it had given Volkswagen until October 7 to submit measures and a timetable to fix vehicles that have been fitted with the cheating software, a ministry spokesman said.

According to German media reports at the weekend, Volkswagen ignored warnings from staff and a supplier years ago that the emission test rigging software was illegal.

The scandal has tarnished VW’s name, left it exposed to up to 18 billion dollars (16 billion euros) in US fines, and wiped a third off its stock market value in a week.

Earlier on Monday, Volkswagen’s top-of-the-range automaker Audi said that 2.1 million of its diesel cars worldwide are among the 11 million fitted with the so-called defeat devices, including 1.42 million in Europe, 577,000 in Germany and 13,000 in the United States.

The environmentalist group Greenpeace lashed out at VW’s piecemeal communication of the scandal, especially after new CEO Mueller promised a “ruthless” investigation into the affair and a “fresh start”.

In addition to Germany, national authorities in several other countries have announced probes. And lawsuits are being filed, including class-action suits in the United States.

VW’s diesel vehicles are coming under close regulatory scrutiny worldwide and France has even extended the checks to cars made by other manufacturers.

VW was not immediately available on Monday to comment on the news of the criminal investigation against Winterkorn, or media reports suggesting the group had suspended a number of managers in its R&D division.

With the carmaker facing the possibility of having to recall as many as 2.8 million vehicles in Germany alone, the direct and indirect costs of the affair are still incalculable.

VW has already said it would set aside 6.5 billion euros in provisions in the third quarter. But analysts at DZ Bank suggested it could be 1.0-3.0 billion euros more.

On top of that sum, VW also faces onerous regulatory fines, including up to $18 billion in the US. And the fallout on customer purchases cannot yet be estimated.

Investors appear to fear that more bad news is still to come.

After losing 34 percent of their value or around 25 billion euros last week, VW shares were again the biggest losers on the Frankfurt stock exchange Monday, where they were showing a loss of as much as 8.2 percent in intraday trade.