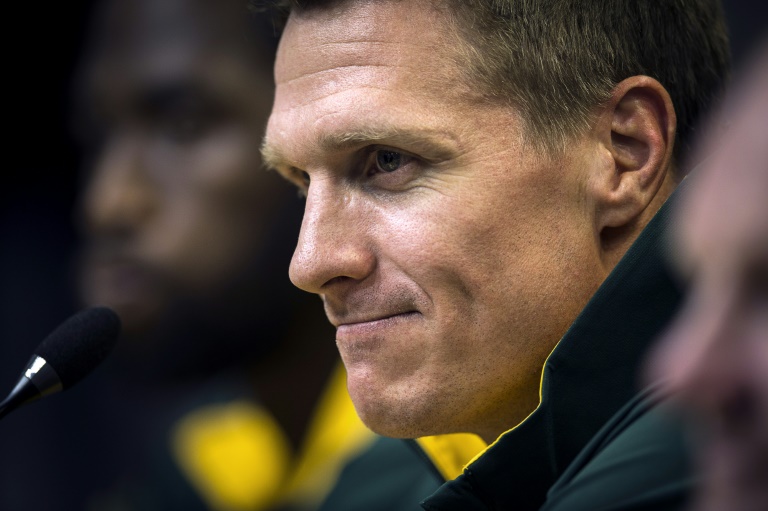 South Africa captain Jean de Villiers on Sunday ended his international career after a fractured jaw ruled him out of the rest of the World Cup.

The 34-year-old centre has 109 caps, the fourth highest in South African rugby, and has captained them 37 times.

De Villiers suffered the latest of a series of injury blows that have blighted his international career in South Africa’s 46-6 win over Samoa on Saturday.

“As I got replaced and I was running off, I knew it was my last,” he added.

“I won’t get this opportunity again. Having played for the Springboks for 13 years now, youâ€™ve been through so much, you’ve made so many good friends, you’ve seen so many good things, you never think that it would end like this.”

De Villiers said he broke the news to teammates on Saturday night and will return to South Africa on Monday for probable surgery on his jaw.

“It’s happened now and I’m very grateful for the time that I’ve had in the Springbok jersey and I wish the team the very best.

“I told them last night, as a former Springbok now, I wish them the very best and I’m supporter number one now.”

South Africa coach Heyneke Meyer hailed de Villiers as “a warrior” and one of the country’s greatest players.

“The way in which he never gave up fighting to overcome his last serious knee injury reminded me again how much of a warrior he is and how highly he regarded the Springbok jersey,” said Meyer, whose own position remains under threat after South Africa’s defeat by unheralded Japan at this World Cup.

“He will go down as one of the greatest Springboks ever and in my eyes he is probably one of the best captains in the history of world rugby, who always put the team first and gave his time for any player, young or old without ever changing who he is.

“To see the emotions in the team room when he said his good byes to his team-mates made me realise how well-liked he is, by every person in this squad, but also most other people in the world-wide rugby fraternity.”

Despite being considered one of the world’s best centres, injuries have repeatedly stopped de Villiers tasting success on the World Cup stage.

He barely made this World Cup after returning from a long lay-off from a serious knee injury suffered against Wales in November.

And Saturday was the second time in two months that de Villiers has broken his jaw. He snapped the other side of his jaw in South Africa’s historic home defeat by Argentina in August.

De Villiers missed the 2003 World Cup because of a shoulder injury which he sustained on his return from a serious knee injury he suffered just seven minutes into his Test debut in 2002.

In 2007 he injured his biceps in the first game and missed the rest of the tournament which South Africa won.

De Villiers and Meyer have faced fierce criticism at this World Cup, where South Africa lost their opening Pool B match 34-32 to Japan.

De Villiers said he had just experienced probably “the toughest week of my rugby career.” But he still believed South Africa could win the World Cup for the third time.

“We’ve still got a massive game this weekend (against Scotland) and certainly I donâ€™t want the guys to feel sorry for me.