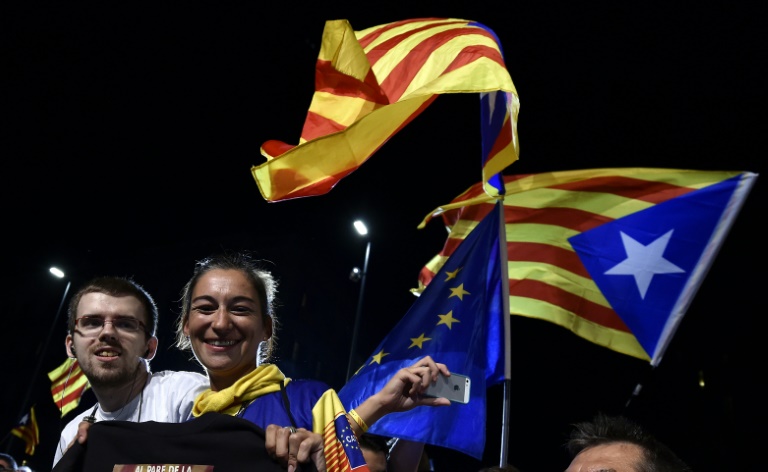 Separatists in Catalonia vowed Monday to push on for independence from Spain after winning control of their regional parliament, but the Spanish government promised to keep the country united.

Raul Romeva, the lead candidate in the main pro-independence list, told reporters his Together For Yes alliance along with the radical left-wing group CUP “have a majority which totally legitimises initialising the process” towards declaring independence.

He warned that a declaration of independence was inevitable.

“If the state shows no will to negotiate, we will do it anyway, because we have a mandate,” Romeva had told AFP earlier.

But in Madrid, Prime Minister Mariano Rajoy said he would not discuss the “end of unity of Spain”.

“I am ready to listen and to talk, but not in any way to liquidate the law,” Rajoy said.

Catalan nationalist leaders framed Sunday’s election in the wealthy northeast region as a proxy vote on secession after Rajoy refused to allow them to hold an official independence referendum like the one in Scotland in 2014.

Rajoy argues a referendum would violate the Spanish constitution. His conservative government is seeking to cement the recovery of the eurozone’s fourth-biggest economy from an economic crisis.

Groups that want to break Spain’s richest region away as a new state in Europe won a combined 72 seats in the 135-seat parliament in Sunday’s polls, but they won fewer than half the votes overall — just under 48 percent.

The separatist alliance led by Artur Mas now faces tough negotiations to strike an accord with CUP, an anti-capitalist citizens’ group that does not want Mas to lead the separatist movement.

CUP said Monday it was launching meetings with various groups in the new parliament to negotiate a deal. All the CUP’s decisions will be made in its grassroots citizens “assemblies”, not by the winning candidates alone.

CUP said it would insist on urgent social aid measures for the poor and that the coalition select a leader other than Mas, who is widely despised on the left.

“We are going to appoint someone who has nothing to do with spending cuts, privatisations and corruption,” said CUP’s number two candidate Anna Gabriel Sabate.

Rival politicians and newspapers were divided over whether the results added up to a victory for the separatists or not.

Together for Yes and CUP insisted the vote gave them a mandate for independence.

But Rajoy said their failure to get more than 50 percent of the vote together shows “they don’t have the support of the majority of people.”

Observers agree the vote leaves Spain in a complicated situation as it prepares for December’s general elections.

“They have used a regional election for a question that should be resolved in a referendum,” he said. “The mandate is a bit lame from the start.”

Other parties jostling to oust the ruling Popular Party (PP) in December’s election staked out their positions, saying the Catalan result supported their calls for political reform.

The main opposition Socialists denounced what their leader Pedro Sanchez called the “intransigence” of the PP against the separatists’ demands.

Spain’s left-wing protest party Podemos too cast the vote as a defeat for the PP, criticising its combative approach to the region.

Albert Rivera, the leader of the rising centrist party Ciudadanos, said Monday: “Today begins a programme of reform for Spain.”

Analyst Pablo Simon said the result “sends a very strong signal to Madrid, telling them they have to put something on the table. Otherwise the situation is going to fester.”