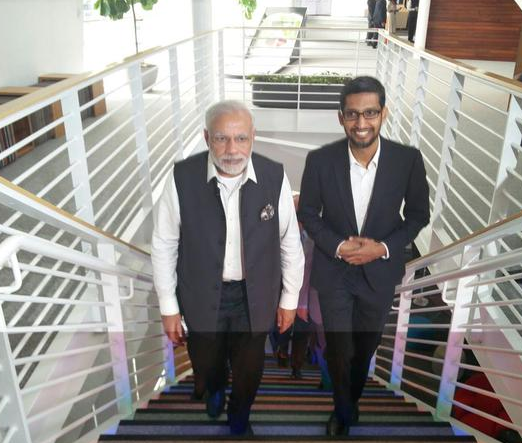 Mountain View (California): Prime Minister visited the Google campus where he was given a tour of some of the latest products and forward-looking researches being done by the technology giant.

Google will collaborate with Indian Railways to provide wi-fi services at 500 stations by next year, Prime Minister Narendra Modi announced as he visited the headquarters of the search engine giant.

Modi, who took a tour of the Google campus seeing the latest products and forward-looking researches, was given a presentation of Google Earth in which the ghats of his Lok Sabha constituency Varanasi were shown.

He appreciated and encouraged Google to develop Apps which could benefit the common man as he participated in Hackathon under which its employees sat for 15 hours straight to devise such Apps for use in India.

Making brief remarks to the Google employees, most of whom are Indians, Modi announced that “Indian Railways and Google will collaborate to provide wi-fi at 500 railway stations in India.”

Earlier, India-born Google CEO Sundar Pichai said the seach engine giant will provide high speed internet services at 100 railway stations in India initially and then expand it by 400 more by next year.

Recalling his young days when he used to travel by train from Chennai to Kharagpur, Pichai noted that 25 million people daily ride the Indian Railways which has 7500 stations.

He also pointed out that the length of Indian Railways is twice the distance between Earth and Moon.

Modi pointed out that the network of Indian Railways is equivalent to a country in Europe.

During his tour of the company, the Prime Minister was given a view of Project Iris- a smart lens that measures glucose levels.

Following that, Pichai explained navigational, safety and other uses of Street View and Google Earth to the Prime Minister.

PM asked that Khagaul be pinpointed on Google Earth. Khagaul near Patna is where the great ancient astronomer Aryabhatta had an observatory.

Projects for Progress. @google gives a tour to PM of four critical projects and their value for @_DigitalIndia pic.twitter.com/3AJawGBoN7

The Prime Minister was also joined by Chairman Eric Schmidt and Google co-founder Larry Page in the tour of the headquarters.

Modi was given a tour of four critical projects and their value for the ‘Digiatal India’ campaign.

Earlier, Prime Minister Modi visited Facebook’s headquarters in Menlo Park and answered questions from some of Facebook’s 1.5 billion users at the Townhall.

Speaking in Hindi, he answered a number of questions on Make in India, social media, women empowerment and his mother.