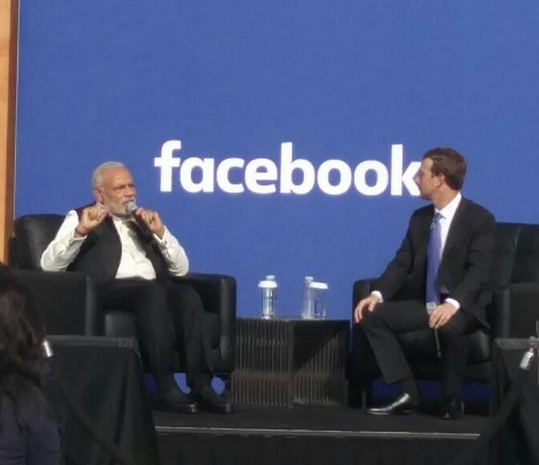 Modi wrote a special message in Gujarati ‘Ahimsa is the greatest Dharma, Satyameva Jayate’ on the wall of Facebook Headquarters in Menlo Park, California.

PM @narendramodi writes on the wall after the Townhall Q&A. pic.twitter.com/t1UfgrhRLN

Zuckerberg said that he supports the Indian government’s effort to connect rural communities to the internet. He also said that he is very excited about India.

“I am happy that I am connecting with Mark Zuckerberg today, the person responsible for everyone over the world connecting,” Modi said. “I hope you can become the inspiration and aspiration of Indians worldwide,” Modi said.

“We are an 8 trillion economy today. My dream is for India to become a 20 trillion dollar economy,” Prime Minister Modi said. India is a heaven for those wanting to invest, we are are working on ease of doing business, Modi said. He also said that many countries do not know where to invest money.

I wasn’t fortunate enough to get knowledge as I wasn’t educated enough. But I think social media made up for that a lot, Modi said.

Modi said social media has strengthened the bond between the government and people.

“Social media can tell the government where it’s going wrong, gives them opportunity for cross correction, this is the strength of democracy,” he said.

The Prime Minister also said social media is a form of daily voting for a democracy.

“MakeInIndia will be successful, we have certain assets other countries doesn’t have,” PM Modi said in Townhall. He wooed investors and said that India has a huge potential; in last 15 months we’ve had foreign direct investment from USA grow by 87%, Modi said.

“My father is no more and I have my mother who is over 90 years old but still does everything herself. Even though she is illiterate, she keeps abreast of the news through television,” Prime Minister Modi said.

When Facebook CEO Mark Zuckerberg asked the Prime Minister to tell some experiences from his life about his mother, the latter broke down while remembering how she used to do labour and hard chores to bring him up.

“When we were small, what my mother did for a living and for our family to survive was to go to our neighbour’s house and clean utensils. You can imagine what a mother had to do and what she must have gone thorough to raise her kids. This is not just the case of Narendra Modi, there are lakhs of mothers who have sacrificed their entire lives for their children. And for that, I would like to thank and praise all mothers everywhere,” Prime Minister Modi said.

He also commended Zuckerberg’s parents, who were present at the session, for giving birth and raising such a person who had ‘digitally united the world’.

Today because of social media governments are being given a chance to fix mistakes, Modi said.

“We are bringing technology into governance in a very big way. This is making governance easy, effective, economical and transparent,” Modi said. He also said that now a lot of priority is placed on technology.

“Will connect all Indian villages via optical fibre,” Modi said. He also said that India has huge potential in the field of tourism.

Modi said 60 percent population in India did not have a bank account till a few months ago. “ We have opened 18 cr accounts in the first 100 days of tenure. “Government is working on deregulation, government should have no business to be in business, Modi said.

He also said that India needs to focus on agricultural, service and manufacturing sector to achieve that. When I adopted social media, I did not know I will go on to become a CM or a PM, Modi told Zuckerberg.

I never though social media could be used in such a way when I started out with, it was out of curiousity, Modi added.

A number of people from all walks of life were presented at the Menlo Park headquarters of online social networking website Facebook. Zuckerberg has voiced a strong support for the Digital India initiated by Prime Minister Modi`s government in his Facebook post.”Looking forward to discussing this with Prime Minister Narendra Modi at Facebook today,”

Zuckerberg had earlier said in a Facebook post.”I`ll host Indian Prime Minister Narendra Modi for a Townhall Q&A at Facebook HQ, where I`m looking forward to having a conversation about what connectivity means for India`s future,” Zuckerberg wrote in a post on Facebook.

The Townhall was held at the Facebook headquarters, which has issued strict instructions for employees and media personnel to follow a formal dress code.

Modi continued his Silicon Valley tour with visits to Facebook and Google Inc headquarters before an event at the San Jose Convention Center that 18,000 people are expected to attend.

With inputs from agencies