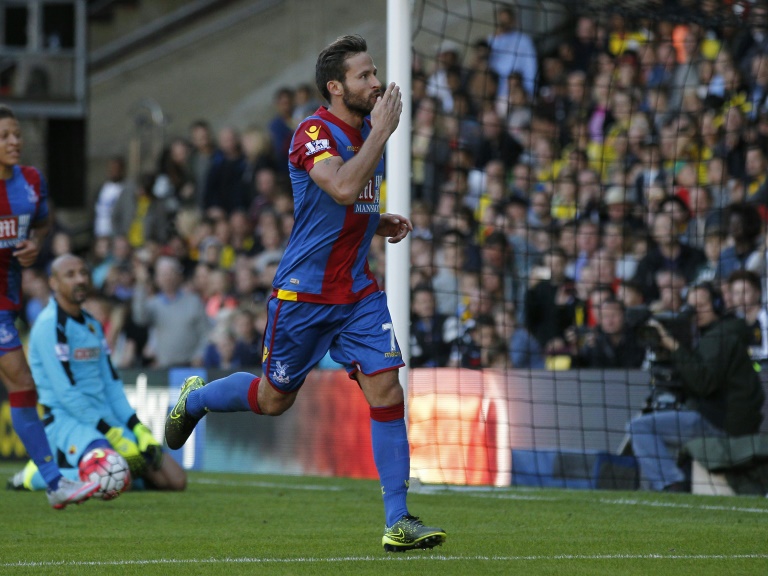 Yohan Cabaye slammed home a decisive 71st-minute penalty as Crystal Palace won 1-0 at Watford on Sunday to climb to sixth place in the Premier League table.

The France international struck from the spot after Allan Nyom was penalised for sliding in on Wilfried Zaha on the left-hand edge of the penalty area.

It was the first goal Watford had conceded at Vicarage Road since securing promotion from the Championship last season, as Quique Sanchez Flores’ side missed out on a third consecutive victory.

Palace had lost their two previous games, to Manchester City and Tottenham Hotspur, but Alan Pardew’s side are now back among the European places, four points below leaders Manchester United. Watford slip to 13th.

Watford were unchanged from their 2-1 win at Newcastle United last weekend and they were the first side to chance their arm on a summery afternoon, with Etienne Capoue shooting wide from out on the right.

Chances were at a premium in a cagey first half, but Palace went close in the 13th minute when Cabaye’s free-kick met the head of Brede Hangeland, who was denied at point-blank range by Watford goalkeeper Heurelho Gomes.

The home side began to assert themselves in the second period, however, with Jose Manuel Jurado curling a free-kick against the bar from 25 yards and Wayne Hennessey saving a crisp low shot from Almen Abdi.

But as the game approached the hour mark, Palace’s rapid counter-attacks began to cause Watford problems.

Bakary Sako saw a deflected free-kick touched around the post by Gomes and Dwight Gayle side-footed a shot against the right-hand post before Nyom’s rash challenge enabled Cabaye to put the visitors in front.

The former Paris Saint-Germain midfielder confidently drove his spot-kick into the top-left corner and Palace would have won more comfortably had Gayle not shot wide from Zaha’s cross.

United finished the weekend top of the pile, for the first time since Alex Ferguson’s retirement as manager in 2013, after they beat Sunderland 3-0 on Saturday and previous leaders Manchester City lost 4-1 at Tottenham.