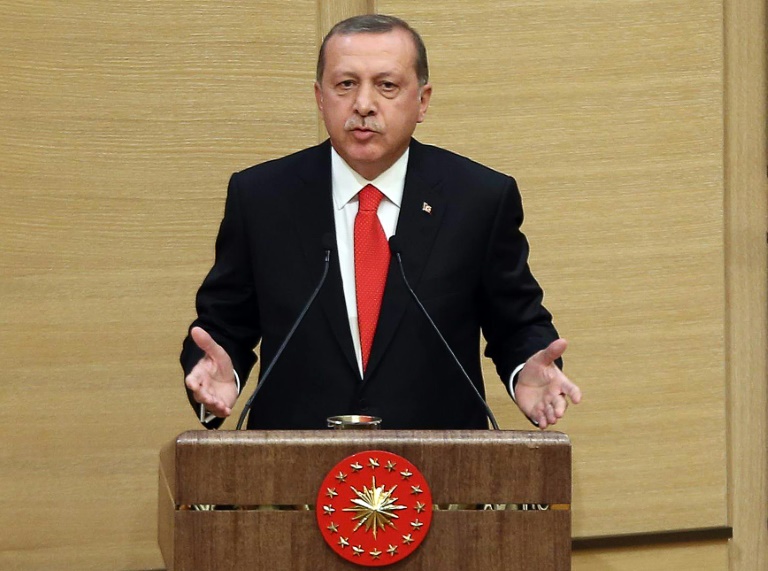 President Recep Tayyip Erdogan on Tuesday vowed that Turkey would press on with its relentless campaign against Kurdish militants “until not one terrorist” was left, as Ankara launched new air strikes against the rebels.

Turkey is currently pressing a two-pronged “anti-terror” offensive against Islamic State (IS) jihadists in Syria and PKK militants in northern Iraq and the southeast following a wave of attacks.

But, so far, the air strikes have overwhelmingly concentrated on the separatist Kurdish rebels, who have responded by tearing up a 2013 ceasefire and waging a bloody campaign against the security forces.

“We will continue our fight until weapons are laid down… and not one single terrorist remains within our borders,” Erdogan said in a televised speech in Ankara.

He said the weapons of the PKK and other militant groups must be buried “under concrete” to show they were no longer a threat to the Turkish state.

The overnight strikes hit 17 PKK targets in the southeastern province of Hakkari, destroying them all, the army said.

On Monday, four Turkish police officers were killed in a roadside bombing in the southeastern province of Sirnak while a Turkish soldier was killed in a rocket attack on a military helicopter.

Meanwhile in Istanbul, a senior police officer in charge of the city’s bomb disposal department was killed in clashes that followed a pre-dawn suicide bombing.

The PKK Tuesday claimed that attack, confirming that three of its militants had been killed, including a suicide bomber, and dismissing claims a smaller leftist group had been behind the strike.

In new violence overnight, a Turkish soldier was killed in a gun attack on a military post in Sirnak, also blamed on the PKK.

According to an AFP toll, 29 members of the security forces have been killed in violence linked to the PKK since the current crisis began.

The state-run Anatolia news agency reported over the weekend that so far 390 “terrorists” had been killed in the campaign against the PKK.

Erdogan said that the over-two-week air campaign against the PKK had already inflicted “serious losses” on the group.

But even such an intense campaign may not be enough to finish the PKK.

“Turkey’s air campaign damages the PKK, but is not sufficient to destroy it,” said Pinar Elman, Turkey analyst at the Polish Institute of International Affairs (PISM).

“The decades-old conflict has shown that military means are not sufficient to fight against the terrorist group, and political reforms are necessary,” she told AFP.

The Marxist-inspired PKK has waged a three decade insurgency since 1984 for greater autonomy for Turkey’s Kurds that has left tens of thousands dead.

Erdogan also declared the peace process to end the PKK insurgency was currently “on ice.”

“This is a familiar lose-lose dynamic,” said Nigar Goksel of the International Crisis Group (ICG)

Ankara has also vowed to begin strikes in the next days against IS jihadists in Syria alongside US forces who have now started arriving to use the well-located Incirlik air base in southern Turkey.

Prime Minister Ahmet Davutoglu told the BBC in an interview a key goal of the Turkey-US cooperation would be the creation of a “safe area” inside Syria, free of IS fighters, where some of the 1.8 million Syrian refugees hosted by Turkey could go home.

He described the “safe area” as “an area where civilians can stay without any fear of being attacked and killed.”

Davutoglu did not rule out sending ground troops into Syria but argued that if moderate Syrian anti-regime forces were capable “there will not be any necessity for other countries, including Turkey, to send ground troops.”

But in Washington, deputy State Department spokesman Mark Toner was far more circumspect on the idea of a safe zone inside Syria.

“There’s no zone, no safe haven, we’re not talking about that here. What we’re talking about is a sustained effort to drive ISIL (IS) out of the region,” he said.