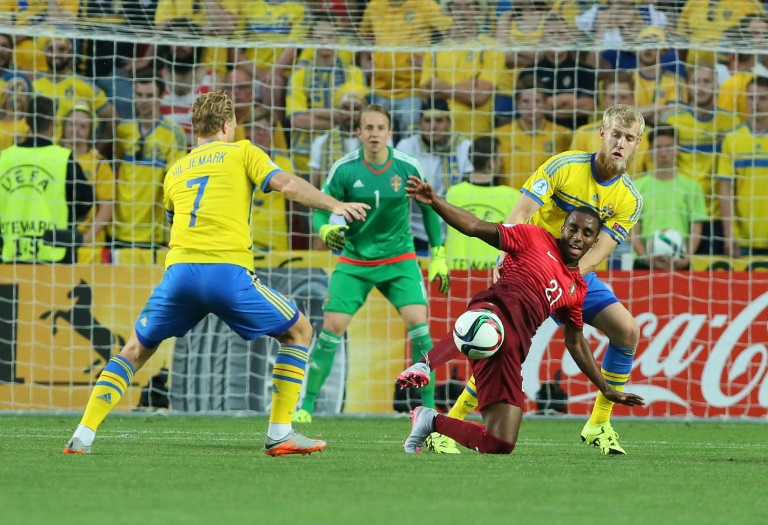 Goalkeeper Patrik Carlgren saved two penalties in a shoot-out to lead Sweden to victory over Portugal and their first European Under-21 title in Prague on Tuesday.

The AIK Stockholm stopper sent a vociferous yellow-clad crowd at Prague’s Eden stadium into raptures when he saved attempts by Ricardo Esgaio and William Carvalho for a 4-3 win in the shoot-out following a goalless draw after extra time.

His Portuguese counterpart Jose Sa, who let in a single goal in the entire tournament, only managed one save in the shoot-out.

“It was a fantastic match from beginning to end. We knew they’d have a lot of the ball, but we played one hell of a match.”

Of William Carvalho’s decisive spot kick, he added: “I had a feeling he’d go for that side, I went the right way and saved the penalty.”

Portugal had swept past Germany 5-0 in the semi-final, but Sweden’s defence proved a harder nut to crack.

Playing their first under-21 final since 1994, Portugal created more scoring chances and went on an attacking spree early in the game but Pereira Ricardo missed Carlgren’s right post narrowly with a low left-foot shot after two minutes.

Sweden, who last played an under-21 final in 1992, ventured forward on 12 minutes when Isaac Kiese Thelin headed into Sa’s hands.

Sweden striker John Guidetti, who spent last season at Celtic, half-volleyed just over the bar on 52 minutes in the best scoring chance of the game.

Joao Mario sent his shot over the bar five minutes from time and Guidetti’s close-range shot was denied by Sa, who also intercepted a pass aimed by Guidetti at Kiese Thelin in front of goal.