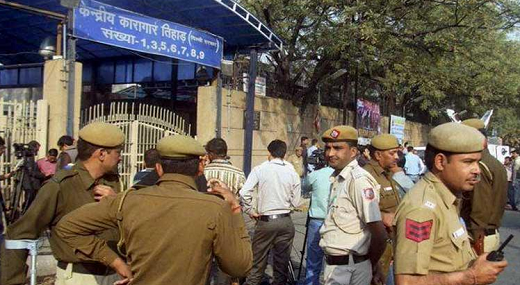 New Delhi: Two days after escaping from the high-security Tihar prisons, the second undertrial was on Tuesday arrested from Gonda district of Uttar Pradesh by Delhi Police.

Jawed, who had escaped from Tihar prisons along with another prisoner, Faizan, on Saturday was arrested by a joint team of Delhi Police and jail authorities on Tuesday evening.

“Jawed was arrested by a joint team of Delhi Police and prisons,” said DIG prisons and Tihar spokesperosn Mulseh Pratap.

The two small-time burglars had pulled off the near-impossible jailbreak from the high-security jail here during which they had scaled three 13-feet high walls and drilled a hole in the fourth one which was two-feet wide.

Central Home Ministry later sought a report from Tihar authorities while Lt Governor Najeeb Jung had ordered a magisterial inquiry into the case.

The two inmates were lodged in a special ‘Roza’ ward in Jail No. 7. Jail authorities had created this ward for inmates observing fast during the Islamic Holy month of Ramzan.

However, soon after coming out of the prison complex, Faizan developed a cold feet and did not go with Jawed who managed to flee.

According to sources in Tihar, it all happened between Saturday morning’s roll call and the one that took place in the night.

Jawed had three cases of burglary and attempt to burglary pending against him. He was brought to Tihar on June 2 while Faizan came to the jail on June 24. Both of them met in the prison and became friends. While Jawed is a resident of Devli, Faizan’s family lived in Madanpur Khadar.