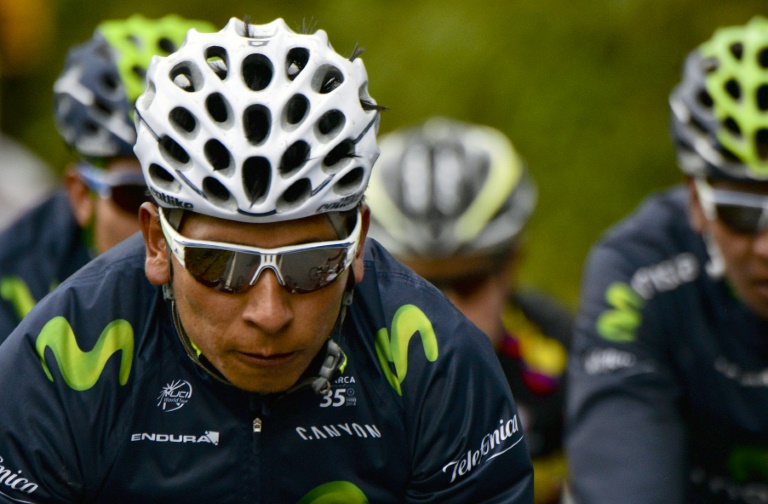 Quiet and unassuming he may be, but for many people the explosive Nairo Quintana will be the man to beat at the Tour de France this year.

The 25-year-old Colombian has been keeping himself out of the limelight during the Tour build-up, training back home in Tunja and avoiding the traditional Tour warm-up events.

Yet although he goes quietly about his business, he has been racking up the results nonetheless, winning the prestigious Tirreno-Adriatico race back in March, triumphing on the one true mountain stage and doing so by enough to ensure overall victory.

And in a Tour that is heavily weighted in favour of specialist climbers, Quintana has the perfect platform to launch his bid to go one better than he managed two years ago when finishing second to Chris Froome and capturing the polkadot king of the mountains and white young rider jerseys along the way.

All his best results have come in tours that include mountain stages, winning the Tours of Murcia in 2012, Basque Country and Burgos in 2013, San Luis and Burgos in 2014 and now Tirreno-Adriatico this year.

He also won the youth Tour de France in 2010 and the Giro d’Italia last year.

This year, it would seem, his entire focus has been on the Tour and he will have plenty of opportunities to use his climbing strengths with six summit finishes.

Quintana is the lightest of the four overall contenders and widely seen as the best climber in the world.

He has also made a habit of starting slowly in Grand Tours and coming on strong in the final week, in which there are four mountain stages, so that should suit the Movistar leader.

He has a genuine foil in the form of Alejandro Valverde who, while not a strong enough three-week contender to win, is good enough to ensure that the other main contenders cannot ignore him.

Valverde has won the Vuelta a Espana in the past and was fourth on the Tour last year, so the likes of Vincenzo Nibali, Chris Froome and Alberto Contador would be obliged to chase him down if he attacked, leaving Quintana to sit and wait for his own opportunity.

Quintana is also blessed with a certain stubbornness that sees him seemingly prepared to throw away any hopes of victory rather than take responsibility for the chasing down of rivals.

Such apparent nonchalance often forces others to do the chasing while Quintana saves energy, allowing him to make his move later on when others are tired.

But he also has weaknesses, not being a strong time-triallist nor particularly daring on descents.

This year’s Tour route gives plenty of encouragement for the opportunists ready to attack from anywhere in any situation.

Nibali and Contador may not be able to beat Quintana in the mountains, but they can probably put time into him in other areas.

Another issue for Quintana is the weight of history, as no Latin American has ever won the Tour. Yet the diminutive Colombian has never showed signs of nerves affecting his game.

At last year’s Giro he trailed compatriot Rigoberto Uran by three-and-a-half minutes at one stage following a 40km individual time-tiral, yet he eventually beat his countryman by more than three minutes overall.

Quintana didn’t panic when he was behind and simply used the attacking opportunities he had to ride away from his rivals and put time into them.

And it is that knowledge of his climbing skills that should give him an edge on such summit finishes as Plateau de Beille, La Toussuire and Alpe d’Huez.

Quintana knows he will have several uphill finishes to try to make his rivals crack and the tiny Colombian has the ability to do exactly that.