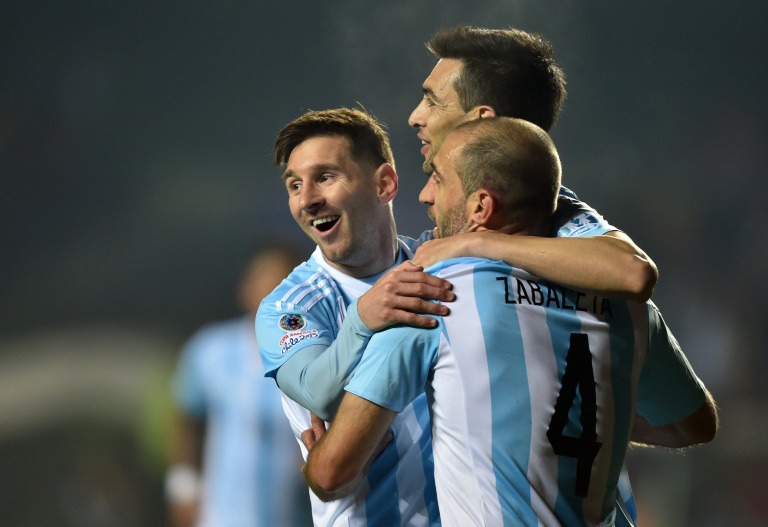 The Barcelona superstar tormented Paraguay mercilessly as the favorites produced their best display of the tournament and advanced to a showdown with Chile in Saturday’s final.

Although Messi failed to end his run of more than 900 minutes without an international goal from open play, he turned creator as Argentina tore Paraguay apart.

A satisfied Messi was delighted Argentina’s potent collection of attacking talent finally appears to have clicked with Saturday’s final looming.

“We’ve been playing well — we knew once we scored one goal, many more would come, and that’s what happened,” said Messi as he collected his man-of-the-match award.

“We got an early goal and then found more space, and then we got the second. We continued to play the same way and more goals came.”

Argentina, who finished runners-up in last year’s World Cup, are determined to clinch a first major title in 22 years at the Copa America.

“The important thing is that we’ve achieved our first objective by reaching final. Now we need to win it,” Messi said.

Manchester United defender Rojo and Paris Saint-Germain’s Pastore had given Argentina a 2-0 lead midway through the first half before Paraguay pulled one back through Lucas Barrios.

But any Paraguayan hopes of repeating their heroics in the group phase — when they came back from two goals down to draw 2-2 — were snuffed out by two goals in six minutes from Di Maria early in the second half.

The carnage was completed with a headed goal from Manchester City striker Aguero in the 80th minute before substitute Higuain made it 6-1 just after coming on.

Argentina’s opener came from a setpiece after 15 minutes.

Messi flighted a teasing free-kick into the area and when the ball dropped to Rojo, the defender reacted quickest and drilled in a low shot.

The Argentinians should have doubled their lead six minutes later when Messi sprinted clear of the Paraguayan cover and released Pastore down the left.

But with the goal begging, Pastore took took too long to get a shot away and Victor Caceres was able to slide in to make a desperate last-ditch block.

Yet Pastore did not have to wait long to make amends, seizing his chance when presented with another gilt-edged opportunity by Messi six minutes later.

Slick approach play saw the ball end with Messi, who deftly carved open the Paraguayan defence to play in Pastore.

The midfielder controlled on the run with a sublime first touch before bludgeoning a low shot past Justo Villar.

A disastrous start for Paraguay was compounded when veteran striker Roque Santa Cruz limped out of the contest, to be replaced by Barrios.

As half-time approached, however, Argentina’s defensive frailty was exposed once again with sloppy play at the back presenting Barrios with the chance to lash home a shot from 20 yards to give Paraguay hope.

Paraguay’s fightback was extinguished within eight minutes of the restart, however, as two goals from Di Maria put the favourites 4-1 up.

A superb counter-attack saw Pastore slip in Di Maria, whose low shot made it 3-1 on 47 minutes.

In the 57th minute, Messi set up Argentina’s fourth, jinking clear of the Paraguay defence to feed Pastore.

Pastore’s shot was saved by Villar but only as far as Di Maria, who tucked away his second.

The only question thereafter was whether Messi would get on the scoresheet.

The diminutive maestro produced a mesmerizing burst past three Paraguay defenders on 68 minutes only for his finish to be blocked.

On 80 minutes, Aguero headed in from Di Maria’s cross and three minutes later Higuain got on the scoresheet after another probing Messi run.