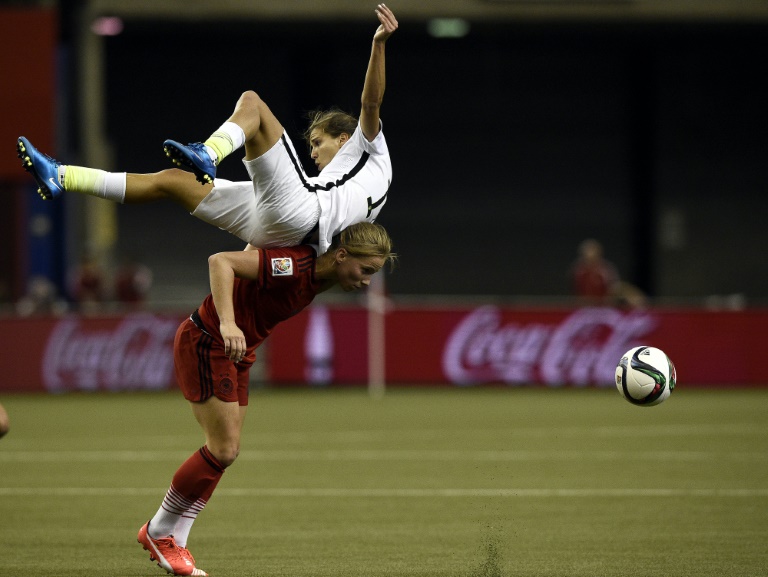 An inspired performance from Carli Lloyd lifted the United States into their second straight Women’s World Cup final with a 2-0 win over top-ranked Germany on Tuesday.

In a battle between the world’s top two teams, the United States largely dominated in front of 51,000 largely US supporters at Montreal’s Olympic Stadium.

In a dramatic second half, Germany’s Celia Sasic missed a penalty kick on 60 minutes before Lloyd opened nine minutes later from the spot with defender Kelley O’Hara sealing victory with her first-ever goal for the Americans six minutes from time.

“I came here to win this thing not just be a participant that played in a World Cup,” warned the 32-year-old Lloyd, who was wearing the captain’s armband.

“It’s a good feeling. I’ve a really confident feeling in us winning it.”

The United States, winners in 1991 and 1999 and ranked second in the world, will play either defending champions Japan or England for the title in Vancouver on July 5.

Japan beat the Americans in a dramatic penalty shoot-out to take the title four years ago.

“We’re in a World Cup final, one opponent stands in our way and for me it doesn’t matter who it is,” said US coach Jill Ellis.

“We’ll take either (England or Japan). That sounds arrogant.”

The Americans dominated the first half, with forward Alex Morgan having the best chance to open but Nadine Angerer held firm in the Germany goal.

A second effort from Morgan from close range also failed to find the target.

After the break, Germany’s Anja Mittag headed wide but on the hour mark the European champions had a golden chance when US defender Julie Johnston pulled down Alexandra Popp as the midfielder slipped in on the blindside.

Sasic, the tournament’s top scorer with six goals, send the shot low and just wide of Hope Solo in the US goal, to tears of relief from a distraught Johnston.

The Americans were then awarded a contested penalty when Morgan was brought down by defender Annike Krahn in a tackle that looked outside the box.

And Lloyd made no mistake, stepping up and sending the ball into the corner of the net for her third goal in as many games as Angerer dived the opposite way.

And minutes later, Lloyd pulled clear of her marker to run down the field, crossing to O’Hara, who entered in the 75th minute. O’Hara fired in the winner from close range, dumping former two-time winners Germany.

“It was clearly outside of the area and it can be seen quite clearly on television,” said Germany coach Silvia Neid of the penalty awarded against them.

Germany had been bidding for a record third title and to match their men’s team who won the World Cup in Brazil last year.

“It was a great semi-final between two very strong teams at high level. Unfortunately we were not dangerous enough when it came to the goal area and congratulations to the United States,” said Neid, who had a role in both Germany’s titles in 2003 and 2007.

Germany next prepare for the third-place playoff in Edmonton on Saturday.

“We’re going to have to support Celia,” Neid added.

“She shot two penalties against France. Today she missed. That type of thing happens in sport. She will have gotten over that by Saturday.”

Japan and England play their semi-final in Edmonton on Wednesday.