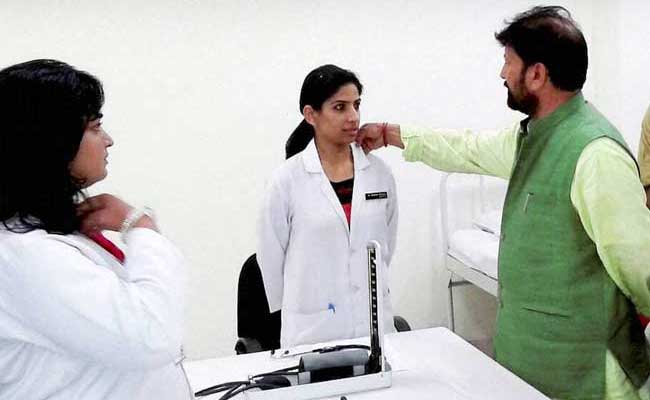 Lakhanpur: The image of a minister in Jammu and Kashmir touching the collar of a woman doctor has been widely circulated on social media and has provoked sharp criticism.

The photograph was taken when Chaudhary Lal Singh, the State Health Minister, had gone to a government hospital to check preparedness for the Amarnath pilgrimage, which began on Wednesday.

Singh reportedly saw the doctor and told her that her collar was not in place. Then he proceeded to fix it.

“The minister moved towards her and said … ‘Bitiya your collar is not proper’ and corrected it himself. The doctor said nothing,” said an officer who was present at the time.

The officer said another woman doctor, on seeing the minister admonishing the doctor, fixed her own collar.

“There were lots of people. I do not think he acted inappropriately,” he remarked.

Singh, a leader of the BJP, which co-governs the state with the PDP, was lashed on twitter for “inappropriately touching a woman.”

In February this year, Singh was accused by a woman doctor of mental harassment after he rebuked her for not wearing her lab coat.