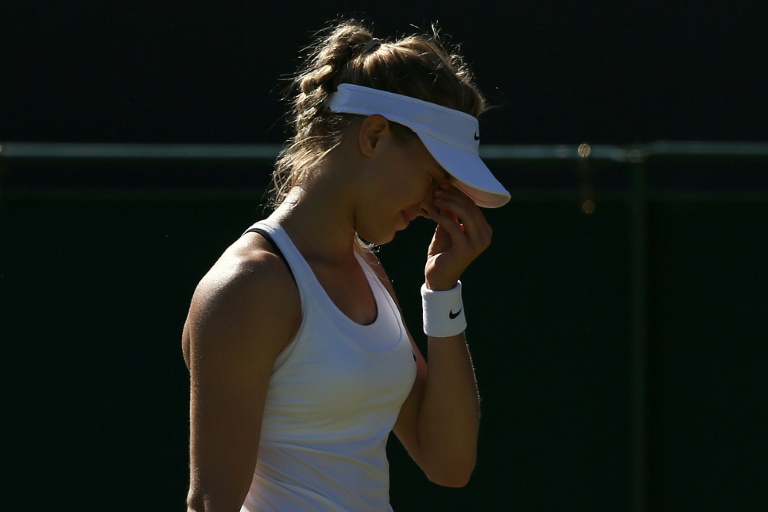 Eugenie Bouchard, who reached the Wimbledon final last year, was dumped out in the first round on Tuesday by China’s Duan Ying-Ying, the world number 117.

The 21-year-old Canadian was one of the show-stealers at Wimbledon in 2014.

However, she has been in a slump since mid-March, falling in the first round of the French Open and sustaining a tournament-ending abdominal injury in the Eastbourne grass-court event.

“I felt very unprepared for this match. But I wanted to play, no matter what,” Bouchard said after her Wimbledon exit.

“I have a grade two tear in my ab. Probably wouldn’t have been smart to play here, but I couldn’t pass on Wimbledon. So I did minimal preparation to save myself for the match.”

Bouchard said she had not yet vented her frustration at her Wimbledon exit.

“I definitely wasn’t going to break my racquet on the court, that’s for sure. You can’t do that at Wimbledon. Maybe something will explode later,” she said.

Bouchard said she would now give in to her body and take some rest.

“I’m going to take some time to heal and maybe not think about tennis for a little bit, then get right back to it,” she said.

“It’s so hard to be forced not to play tennis, especially at Wimbledon.

“I want to find a good trainer who can make me as strong as I can be so I don’t get these injuries.

“One is definitely being not strong enough, but two, there has been some bad luck.

“I’m going to be happy to put this period behind me, for sure. Very disappointed in my last couple months.”

Bouchard reflected on her roller-coaster ride in recent months, saying she was learning from the experience of having a slump in form but still retained the belief that she can challenge for the sport’s top honours.

“It has been a stressful time,” the Quebec native said.

“It’s been a huge learning process to have great results and then have so much attention, then have bad results, just learning about the ups and downs of life and tennis, how things won’t always good perfectly like I expect them to.

“I’m always trying to keep the belief and stay true to myself and do what I need to do to become as good as I know I can be.

“It’s definitely been a tough time. But if I stick with it, keep going, have the success I know I can have, I think it will be that much sweeter.”