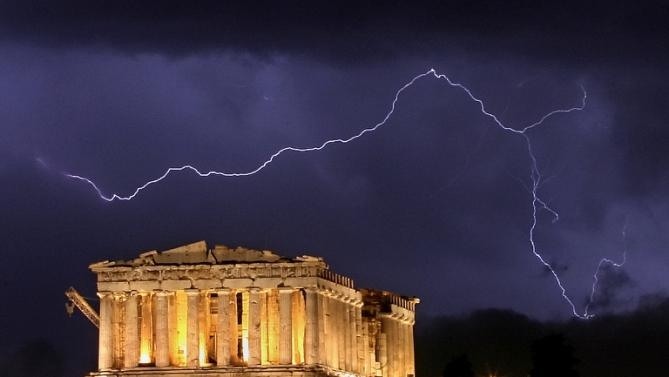 Greece’s economic chaos is hitting headlines around the world again. The country has been in a long standoff with its European creditors on the terms of a multibillion-dollar bailout and now, AthensÂ has become the first developed country to default on its debt to the International Monetary Fund, after missing a 1.5 billion euro ($1.7 billion) payment.

Since the country is a part of the Eurozone, what happens in Greece doesnâ€™t stay in Greece. If the country goes bankrupt or decides to leave the 19-nation eurozone, the situation could create instability in the region and send shockwaves around the globe.

But why is Athens in debt?

Just like a household that spends more money each month than it brings in, Greece has piled up a mountain of debt by spending beyond its means.

In 2001, Greece was given a chance to join the Eurozone. The country could not meet the debt conditions; however, by spinning the numbers, Greece gained entry, not just to the single market but to debt markets that allowed it to borrow as though it was as dependable as Germany.

Greece went on a spending spree on infrastructure, services and public sector wages for six years and the country saw an economic boom. However, matters took a turn for the worse as every country in Europe entered a recession after Wall Street imploded in 2008. Greece became the epicenter of Europeâ€™s debt crisis as it was one of the poorest and most indebted countries in the continent.

Making matters worse, for the purposes of paying out benefits, Greece has a retirement age of 57. While retiring early is good for Greek workers, it created a major financial burden on the government. Tax evasion in Greece is also legendary, and when taxpayers dodge their obligations it means less revenue for the debt-strapped government.

Who do they owe their debt?

At first, Athens borrowed billions of dollars from European banks to make ends meet. But Greece couldn’t come up with the cash to pay off those loans and when it looked like the country may go bankrupt in 2010, it turned to the so-called â€œtroikaâ€ of international creditors â€“ the IMF, ECB, and euro member countries â€“ who stepped in with a series of bailouts. In exchange, the troika said Greece better shape up which meant austerity measures like public sector layoffs, pension cuts, and tax hikes.

It owes its official lenders 242.8 billion euros, with Germany its biggest creditor.

Many of the loans don’t mature for years, even decades.

However some do. In particular, Greece was due to pay 1.6 billion euros to the IMF by the end of June in overdue interest. After that, 3.5 billion is due to the ECB on July 20, and another 3.2 billion in August.

On top of that, more than 8 billion euros in short-term bills are due over the next two months.

What is the current situation in Greece?

The current situation in Greece looks gloomy as it still can not come up with the funds to pay its bills on its own.

The austere terms of the bailouts have caused resentment among Greeks and contributed to crisis-level unemployment and poverty.Â  Its unemployment rate is above 25% and its GDP has fallen by roughly 30% since 2008, according to World Bank data. Greece’s debt is nearing 200% of GDP.

Most of the bailout money Greece receives is used to repay loans from its creditors. And it is virtually impossible for Greece to pay down its enormous debt when the economy is underperforming.

Greece faces a hard choice: it can accept the Troika’s demands for further austerity. Or it can defy the Troika, which would likely lead to a default on Greek debt and possibly a Greek exit from the Euro. The Greek government is holding a referendum on July 5 to let voters choose between these bad options.

In the meantime, the Greek economy is melting down. Knowing that Greek Euro deposits could soon be transformed into devalued drachma deposits, Greek people have been rushing to ATMs to withdraw as much cash as they can. That has forced the Greek government to close the banks and limit withdrawals to â‚¬60 per day.

Will India be hit by the shockwave?

Finance secretary Rajiv Mehrishi said the economic crisis in Greece may trigger capital outflows from India and the government is consulting the RBI to deal with the situation.

RBI governor Raghuram Rajan has said the Indian economy will see through any impact of the Greece crisis. Robust forex reserves, which are at an all-time high of $355 billion, will cushion any possible impact of the crisis.

Economists say there could be some temporary volatility in the financial market and if a Greece exit happens, then rupee might depreciate.

Indian authorities say they are drawing up plans to meet any adverse impact on the economy from the crisis. However, economists say authorities are better prepared this time to face any adverse fallout as the situation in Greece has been volatile for some time.