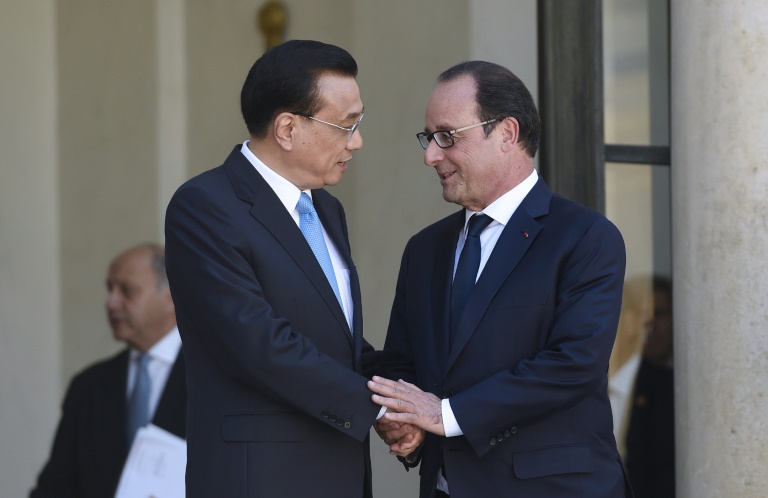 China’s Prime Minister Li Keqiang made a long-awaited pledge to curb carbon emissions during a trip to France Tuesday in which a Chinese company also inked an $18 billion (16.1 billion euros) deal with Airbus.

France has rolled out the red carpet for Li as it seeks to ratchet up economic cooperation with the world’s second biggest economy and some 50 trade deals are expected to be signed during the prime minister’s three-day visit.

Li chose to unveil China’s hotly-awaited climate target in Paris, which will host UN climate talks at the end of the year tasked with producing a global pact on curbing climate change.

“China’s carbon dioxide emission will peak by around 2030 and China will work hard to achieve the target at an even earlier date,” Li’s office said in a statement as he lunched with President Francois Hollande on the first of a three-day visit.

“For a country with a population of around 1.3 billion this is very difficult but we will try to do our best,” Li told journalists.

China also aims to cut carbon dioxide emissions per unit of GDP by 60-65 percent over 2005 levels by 2030, and the share of non-fossil fuel in primary energy consumption will grow to about 20 percent.

Hollande’s office welcomed the announcement as a sign of China’s “support and confidence in the COP21” climate conference.

With France sweltering under a Europe-wide heatwave, Li said the weather echoed the “intensity of the warmth” of bilateral ties between the two nations

His trip comes six months after French Prime Minister Manuel Valls travelled to Beijing and called for more French products to be exported to China to “rebalance” trade between the two countries.

France, which is struggling with weak growth and record unemployment, imports two and a half times as much from China as flows in the opposite direction. In 2013, Paris ran a 26 billion euro ($29 billion) deficit with the Asian giant.

“I repeat once again, Chinese investors are welcome in France,” Valls told a press conference after his meeting with Li.

As well as selling planes, Airbus will also sign a deal on Thursday to set up a centre at its base in the northeastern Chinese city of Tianjin where the aircraft can be customised.

The long-haul A330 will be fitted with more seats in China — where it will travel shorter distances — than in Europe as a solution to the country’s congested skies and airports.

Air traffic in the world’s second biggest economy has skyrocketed in the past 15 years, growing over 500 percent at home and abroad, according to Airbus figures.

The two nations also signed an agreement on joint infrastructure projects to be carried out in Asian and African countries.

China, which has too many factories and is struggling with a slowdown in domestic demand, is pushing its companies to seek new markets abroad and is looking to take advantage of French experience.

French authorities will raise prickly human rights issues with their guest, by expressing “concerns” over new legislation being drawn up in Beijing such as a law governing NGOs, an anti-terrorist law and a law on national security, said a diplomatic source.

On Wednesday Li will head to the southern city of Marseille where he will be met by Foreign Minister Laurent Fabius, who has visited China several times in the past year.

Li will wrap up his tour of France in the southern city of Toulouse where he and Valls will attend a France-China seminar attended by hundreds of Chinese enterprises. Li will also visit the Airbus headquarters in the city.