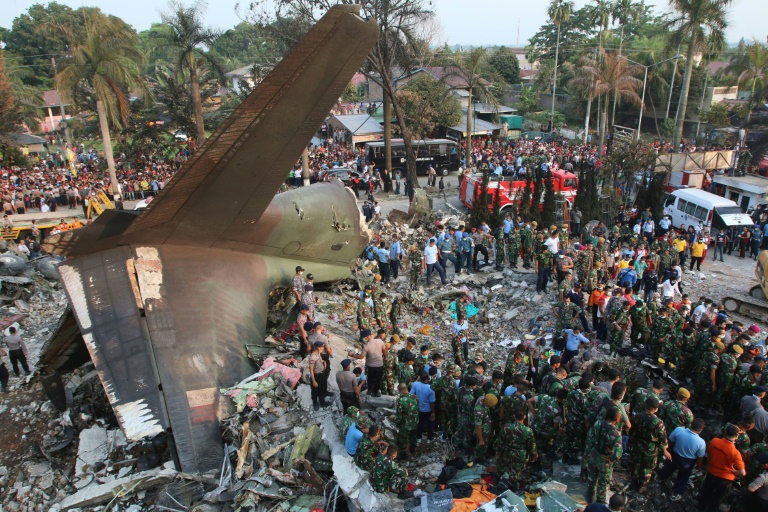 At least 116 people were killed Tuesday when an Indonesian air force transport plane crashed into a major city shortly after take-off and exploded in a fireball, officials said.

Buildings were left in ruins and cars reduced to flaming wrecks when the Hercules C-130 came down in a residential area of Medan, a city of two million on the island of Sumatra.

Air force chief Agus Supriatna said the manifest showed there were 113 people on board the plane — 12 crew and 101 passengers — when it crashed, and he did not believe any had survived.

“No, no. No survivors, I have just returned from the site,” he told AFP in answer to a question.

So far 84 bodies had been pulled from the debris and brought to a hospital in Medan, the hospital said.

Many passengers were likely to be family members of servicemen and women, said a spokesman for Medan airbase from where the plane departed. At least one child has so far been confirmed killed.

Search and rescue officials also said that three people were killed on the ground when the 51-year-old plane went down near a newly built residential area, hitting a massage parlour and a small hotel.

Police said rescuers were still trying to get into the ruined massage parlour, a three-storey building, and they did not know whether there were people inside.

A rescue operation swung into action following the crash, with ambulances ferrying bodies from the site, and crowds of anxious people gathering around a police cordon to view the smouldering wreckage.

US State Department spokesman John Kirby offered condolences to Indonesians in the wake of the incident: “Our hearts and prayers go out to the people of Indonesia.

“They remain strong friends and partners, and we stand ready to assist the government of Indonesia with the investigation as needed.”

Residents meanwhile described the terrifying moment just after midday when the plane came down.

“It was very scary,” said Novi, an employee of an international school who goes by one name, describing how she heard the plane and saw it flying very low before the crash.

Another local resident Januar, 26, said the aircraft appeared to be in trouble just before the accident: “I saw the plane from the direction of the airport and it was tilting already, then I saw smoke billowing.”

Medan’s police chief said the bodies had been “crushed” under the wreckage of the plane and buildings.

Indonesian President Joko Widodo expressed sorrow at the accident, tweeting: “May the families be given patience and strength… May we remain protected from disaster.”

The disaster once again shone a harsh light on Indonesia’s poor aviation safety record. It came just six months after an AirAsia plane crashed into the Java Sea, killing all 162 people on board.

It also raised questions about the Indonesian military’s aircraft — it was the sixth fatal crash involving an Indonesian air force plane in the past decade, according to the Aviation Safety Network.

Following the crash, Supriatna said the military was grounding some of its Hercules planes.

The plane involved in Tuesday’s accident took off at 12:08 pm (0508 GMT) from the airbase and crashed in the city about two minutes later, about five kilometres (three miles) from the base, according to the military.

Shortly after take-off, the pilot had asked to return to base, Supriatna said, adding the aircraft might have suffered engine trouble.

But he added the jet was in “very good condition” and had made several stops before arriving in Medan.

It was the second time in a decade that Medan had suffered a fatal plane accident. A Mandala Airlines domestic flight crashed shortly after take-off in 2005 into a densely populated suburb, killing at least 150 including passengers, crew and people on the ground.

Medan is the biggest Indonesian city outside the main island of Java and a major economic centre.