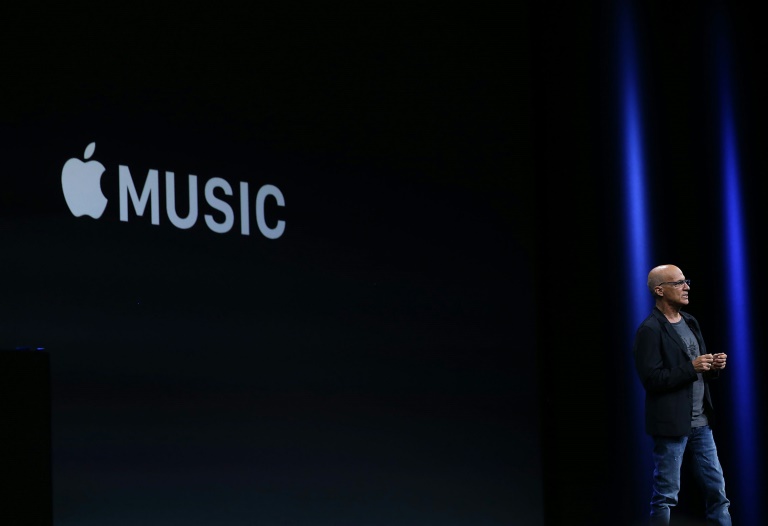 Apple’s new streaming service went live Tuesday with a flashy radio station and artist exclusives, as the company that dominated digital music through iTunes looks to the future.

Apple Music got started with the tech giant in the unusual position of being on the back foot, as Spotify leads the fast-growing market for streaming which offers on-demand, unlimited music.

The service is betting big on celebrity names to draw attention and scored a coup when pop superstar Taylor Swift agreed, after a heated dispute, to stream her blockbuster album “1989” only on Apple Music.

The centerpiece of Apple Music is Beats 1, which bills itself as a first global radio station, and will include guest hosts such as pop legend Elton John and rap entrepreneur Dr. Dre.

The radio station will remain free, even for users who do not pay the $9.99 a month to stream artists, and Apple has made the service integral to its latest operating system on iPhones.

But in a tacit acknowledgement that the company lags behind on streaming, Apple also eventually plans a version for users of rival Google’s Android smartphones.

Another feature is called Connect, which lets artists post messages — keeping listeners on Apple Music rather than switching to social media.

– Seeking to be cutting edge –

Beats 1 took to the air an hour later with host Zane Lowe, the New Zealand-born DJ who was poached from BBC Radio 1.

In a signal of Apple’s effort to nurture a cool factor, Lowe’s first song was not a blockbuster hit but the song “City” by the Manchester indie pop-punk band Spring King.

Lowe, who earned a reputation as an indie rock tastemaker in Britain, said that Apple Music had debated for months about which song to play first.

Spring King put out an EP “with little or no fanfare” but the band’s growing following “is exactly the kind of story we need,” Lowe said.

“It’s not about fanfare. It’s about quality and consistency. We’re Beats 1, we’re worldwide, and from now on, we’re always on,” he said.

Lowe followed up with the new track “Dreams” by Beck, the critically acclaimed Los Angeles alternative artist who won the Grammy for Album of the Year in February.

Apple also succeeded in wooing Swift, whose “1989” is one of the best-selling US albums in recent years.

Swift had initially threatened to boycott Apple Music, speaking up for artists who had complained that Apple would not pay for streams during the initial three-month trial.

Apple quickly reversed itself and Swift — one of the highest-profile critics of streaming, and especially Spotify — agreed to stream “1989” for the first time, on Apple Music.

In a sign of streaming’s growing acceptance, hard rock veterans AC/DC put their catalog Tuesday on Apple Music as well as rival services.

Bjork’s latest album “Vulnicura,” a haunting reflection on a breakup, also appeared on streaming services after the Icelandic singer originally said she would withhold it out of “respect” for art.

But there remain notable holdouts. The Beatles, who refused to sell their music on iTunes until 2010, remain off Apple Music on-demand streaming.

Apple is going up against a crowded field led by Spotify, the Swedish streaming leader that says it has 75 million active users, of whom 20 million pay.

Other competitors include Deezer, Google Play, Rhapsody and Tidal, which was relaunched earlier this year with mixed success by rap mogul Jay Z.

But unlike most of its competitors, music is not Apple’s core business. iTunes and other product sales accounted for less than nine percent of the $750 billion company’s revenue in the last quarter.

Apple’s top goal is likely to preserve its image as being on the cultural vanguard — and to boost iPhone sales.