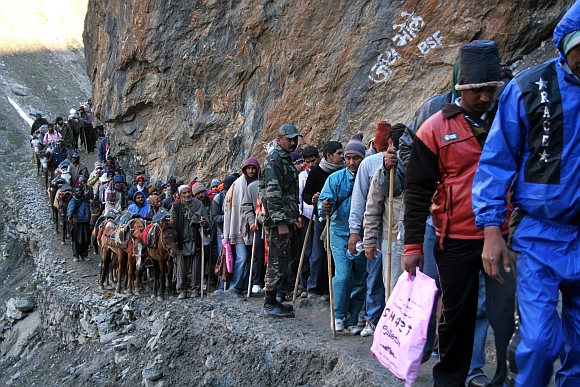 Jammu: Amid tight security arrangements, annual Amarnath Yatra will begin from Jammu on Wednesday, as the first batch of over 5,000 pilgrims will leave for 3,888-metre high cave shrine in south Kashmir Himalayas.

The yatra will be escorted by heavy contingent of security forces to twin base-camps of Amarnath cave shrine in Baltal in Ganderbal district of Central Kashmir and Pahalgam belt of South Kashmir.

As many as 2,400 additional personnel of BSF have been deployed in JK to ensure security during the Amarnath yatra.

The BSF troops have been deployed en route the cave shrine along with personnel of other paramilitary forces and state police forces, a senior officer said.

Director General of Border Security Force (BSF) D K Pathak is currently visiting the state to take stock of the deployment of forces.

Situated in a narrow gorge at the farther end of Lidder Valley, Amarnath shrine stands at 3,888 m, 46 Km from Pahalgam and 14 Kms from Baltal.

In Kashmir Valley, the 59 days annual yatra will start from July 2 – an auspicious day of Hindu calendar and conclude on Shravan Purnima (Raksha Bandhan) on August 29.

Over two lakh pilgrims have secured advance registration and 22,104 have purchased helicopter tickets from Baltal and Pahalgam to Panjtarni.

The first batch comprising 5,100 pilgrims was today flagged off by the state minister for health Choudhary Lal Singh from the Lakhanpur base camp.

Earlier, interacting with the pilgrims, Lal Singh said that government has made adequate arrangements for smooth conduct of the yatra from Lakhanpur to cave shrine.

“Entire state administration is fully geared up to provide every facility like, drinking water, medicare, electricity and security to the yatris at base camps,” he said.