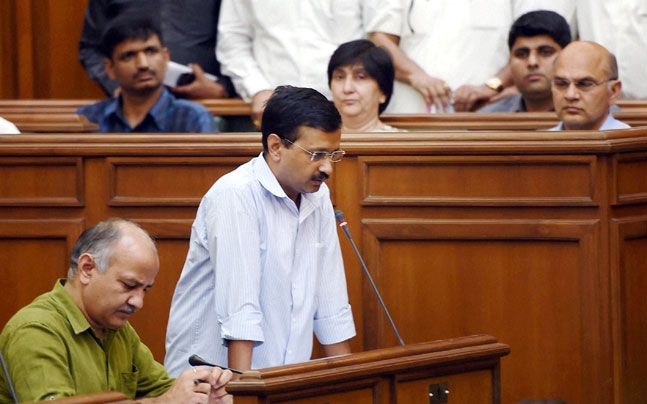 New Delhi: It could be said that the Government in Delhi may be â€˜Aamâ€™ Aadmi Party, but it has made survival difficult for the common Delhiites, as Â VAT Amendment Bill, 2015 which proposes to increase value added tax on petrol, aerated drinks, tobacco and liquor among other products, has been passed by Delhi Assembly on Tuesday.

Petrol price will be hiked by Rs 5.56 per litre to Rs 72.49 in Delhi if the proposal gets final approval.

The Bill was tabled in the Assembly amid ruckus by BJP MLAs who opposed it. A visibly livid OP Sharma broke the mike at his desk when the leader of the opposition, Vijender Gupta, alleged his mike was being turned off when he interrupted or asked questions. Protesting against the AAP government’s proposed VAT rates, Gupta walked in front of the Speaker’s chair and tore off a copy of the Bill. Both the BJP MLAs later staged a walkout from the Assembly in protest.

The AAP government, which presented its first budget last week, decided to table an amendment Bill rather than increasing the VAT rate directly through budget. The budget had proposed imposition of tax on cable TV, DTH, raising of entertainment tax on cinema halls, and levying of entry tax on diesel-driven tempo and trucks in Delhi.

During his budget speech, deputy chief minister Manish Sisodia had said that the Kejriwal government will have multi-level consultations before proposing any change in tax rates.

“We do not want to alter tax rates without due thought and analysis… We wish to collect and mine data, do data analytics, have multi-level consultations and studies before proposing modifications in the rate regime,” Sisodia had said.