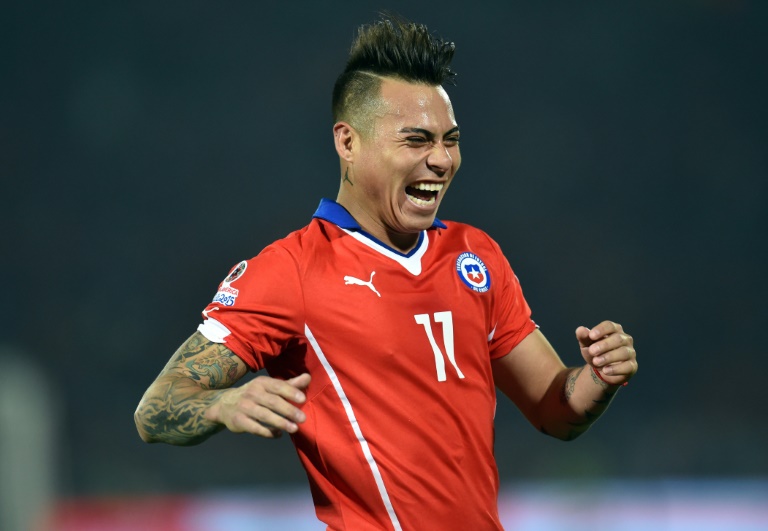 Vargas, who endured a miserable season on loan at relegated English Premier League side Queens Park Rangers, lashed in a stunning 64th-minute strike Monday as the hosts advanced to the final for the first time since 1987.

Vargas had given Chile a controversial lead after 42 minutes, prodding home from close range after the referee’s assistant failed to spot a fractional offside.

Peru, who played most of the match with 10 men after Carlos Zambrano was sent off for a reckless challenge on Charles Aranguiz after 20 minutes, came back bravely to force an equaliser through a Gary Medel own goal in the 60th minute.

But Vargas, who also had a legitimate goal wrongly ruled out for offside early in the second half, restored Chile’s lead with a contender for goal of the tournament.

The 25-year-old picked up a loose ball in midfield, surged forward and unleashed a ferocious dipping 30-yard effort that flew into the top corner past Peru goalkeeper Pedro Gallese.

Chile will now play the winner of Tuesday’s semi-final between Argentina and Paraguay as they chase a first ever Copa America crown after 99 years of failure.

The latest instalment of Chile and Peru’s long football rivalry — known as the “Clasico del Pacifico” — burst into life after only four minutes, when Chile’s Arturo Vidal tangled angrily with Zambrano.

Vidal was fortunate to escape at least a booking for thrusting a hand in Zambrano’s face as tempers threatened to boil over.

Yet while Chile made the brighter start, it was Peru that came closest to scoring in the opening minutes, with Jefferson Farfan’s header from a Paolo Guerrero cross cannoning back off the woodwork.

The match turned in the 20th minute after Zambrano’s dismissal.

The centre-half was given his marching orders after catching Charles Aranguiz with an ugly studs-up challenge as he followed through after a clearance.

Sensing Peru’s vulnerability, Chile turned up the pressure and might have opened the scoring through Jorge Valdivia on 28 minutes, only for the influential playmaker’s curling shot to fly just wide.

Three minutes before half-time, though, Peru’s resistance broke when Sanchez’s cross from the left bounced back off the inside of the upright for Vargas to bundle home from close range.

The goal was harsh on Peru, though, as replays showed Vargas was fractionally offside when Sanchez crossed.

Chile sought to press home their advantage after the break and Vargas was unlucky to see a superb volleyed goal ruled out.

Peru clawed their way back into the contest on the hour mark when Guerrero released Advincula down the right.

The fullback’s cross caused havoc in the Chile area and Medel panicked and prodded home past Claudio Bravo.

Peru’s celebrations were shortlived though when Vargas crashed in his winning goal four minutes later.