US says Solo is best, but Germans back Angerer at Women’s World Cup | Newsmobile
Wednesday, June 29, 2022

Home Sports US says Solo is best, but Germans back Angerer at Women’s World... 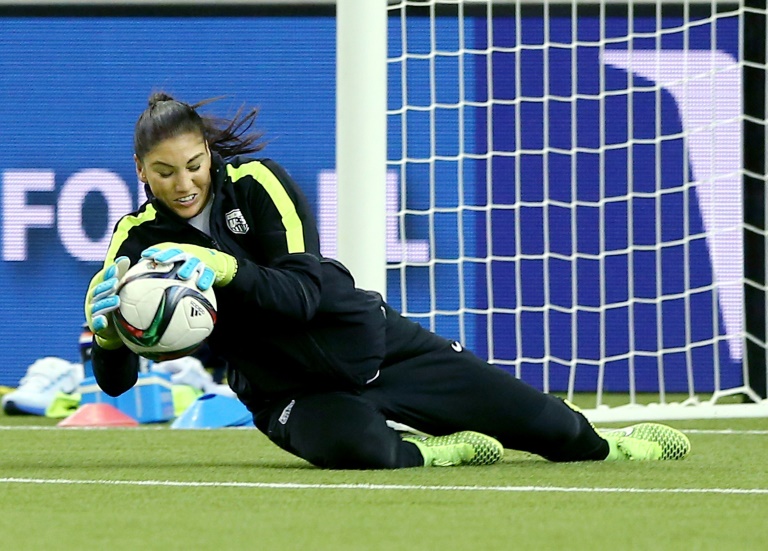 Alex Morgan knows both goalkeepers better than anyone, having played internationally with US teammate Hope Solo and at the club level with Germany’s Nadine Angerer.

So she has a special perspective on the battle between the best shot-stoppers in the women’s game as the world’s top two teams clash in Montreal on Tuesday in a Women’s World Cup semi-final.

Morgan has played alongside 33-year-old Solo on the US team for the past five years and with 36-year-old Angerer at US club Portland Thorns.

“Hope and Nadine are two very different goalkeepers,” forward Morgan said on the eve of a World Cup game she describes as “almost like a final.”

“I’ve obviously played with Hope a lot more,” she said.

“Nadine, she’s a gamer and with Portland in training she always wants to show her best no matter what. That helps her mentally.

“It’s going to be interesting knowing her strengths and weaknesses but her knowing mine as well,” said the 25-year-old Californian.

Solo has an unmatched 88 shutouts in 175 matches played for the US to date and 423 minutes without conceding a goal, a national record for the Women’s World Cup.

“She has proved herself in the last tournaments and in this tournament. I think this next game will probably be the biggest challenge for both keepers,” Morgan added.

Solo has allowed just one goal in the US’s opening game against Australia while Angerer has conceded three goals in Canada.

Germany captain Angerer in 2013 became the first goalkeeper, man or woman, to win the FIFA World Player of the Year Award.

She has been playing for the national team for 19 years, a German record, claiming 144 caps, and is hoping to add to her 2003 and 2007 Women’s World Cup titles in what will be her final international tournament.

“Nadine is very important to us as a team on the pitch and off the pitch. She’s in the form of her life and has been for many years,” said the former two-time FIFA women’s world coach of the year.

“She’s just a great personality. She’s my right hand on the field and very often we sit together and talk about the team. We have a very close relationship and it’s too bad she wants to retire.

“We will definitely miss her.”

Forward Alexandra Popp, 24, described Angerer as “like a big sister”.

“Nadine is a very important player for us not only because she has a tremendous amount of experience but also because of her personality.

“She’s a goalie but she can still give you good tips and that’s why she’s great support for us. She is a world class goalie. She gives us confidence.

“If we mess up a little bit she is there to cover our backs.”