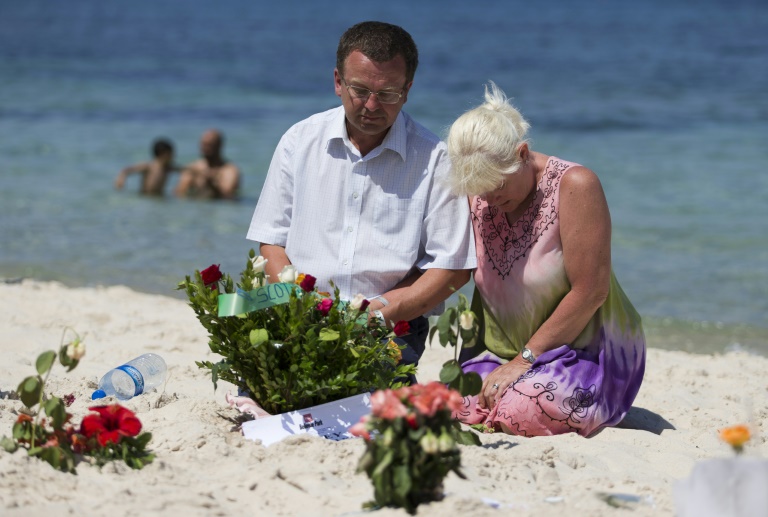 Tunisia said it had made its first arrests after a beach massacre that killed 38 people, as European officials paid tribute to victims of the country’s worst ever jihadist attack.

Tunisia’s Interior Minister Najem Gharsalli said the authorities had arrested “a significant number of people from the network that was behind this terrorist” attack on a popular tourist resort in Port El Kantaoui.

“I promise the victims… that these criminal killers will be brought before Tunisian justice so they are justly punished,” he added, warning that “anyone who provided any logistical or financial assistance” to the attacker would be arrested.

On Friday, a Tunisian identified as 23-year-old Seifeddine Rezgui pulled a Kalashnikov assault rifle from inside a beach umbrella and went on a bloody rampage at the five-star Riu Imperial Marhaba hotel near Sousse, south of the capital Tunis.

Visiting the scene of the attack where up to 30 British people are thought to have died on Monday, British Home Secretary Theresa May pledged to “defeat those who undermine our freedom and democracy” and vowed that “the terrorists will not win”.

She and counterparts from Tunisia, Germany and France laid a wreath at the beach to honour those killed in the attack, which has been claimed by the Islamic State group.

The massacre was the deadliest for Britain since the 2005 London bombings, but May said there was no evidence to suggest the Britons were targeted because of their nationality.

The attack, the second against tourists in Tunisia this year, sent thousands of holidaymakers fleeing the country and sparked fears it could deal a heavy blow to the vital tourism industry that employs some 400,000 people.

“I think that’s just the minimum, but it’s still an estimate,” she told reporters, announcing a string of emergency measures aimed at attracting visitors from abroad and emergency loans to help local tourism businesses.

Shocking amateur footage from the attack has emerged on social media, showing the gunman walking calmly along the shore and bloodied bodies on the sand.

Intermittent gunfire can be heard in the 11-minute sequence recorded by a Tunisian man using his mobile phone who can be heard asking: “Why do you kill people? Why?”

Tunisian Prime Minister Habib Essie said Rezgui had been “mainly radicalised online” but added that it was unclear if he had been to neighbouring Libya, a hotbed of militant training camps.

“There is some information that he belonged to an organisation and he was very close to a mosque” that provided “intellectual” training, Essid told CNN.

Handwritten messages could be seen next to the flowers on the beach, reading “We are sorry” and “We are Muslims, not terrorists”.

British Prime Minister David Cameron vowed to mount a full investigation and called for “a response at home and abroad” to violent Islamic fundamentalism.

The attack prompted authorities to boost security at attractions and along its 1,000 kilometres (620 miles) of coastline.

Officials have said they will deploy 1,000 armed officers from July 1 to reinforce the tourism police who will also carry guns for the first time, and there are plans to close 80 mosques accused of inciting extremism.

Tunisia has struggled to deal with a rise in extremism since the 2011 revolution that ousted longtime strongman Zine El Abidine Ben Ali.

A spokesperson for British Prime Minister David Cameron said Britain had identified 18 of its nationals were among the dead, but warned that the number may rise to “around 30”.

Tunisia says 25 victims have been identified, among them three from Ireland, two Germans, one Belgian, one Portuguese and one Russian.

Another 39 people were wounded, including 25 Britons. Late Monday, a Royal Air Force Boeing C17 flew in to fly wounded people back to Britain.

Some 4,000 tourists have been flown home to Britain since Friday, travel companies Thomson and First Choice said.

France’s travel agencies union said 80 percent of flight and package holidays booked for Tunisia in July have been cancelled, with customers rushing to change destination.

But some tourists chose to stay in Port el Kantaoui, among them Britons John and Lesley Edwards.

“It’s a lovely place and people are great. We didn’t want to leave, we feel pretty safe with the police and the army. There is more police now,” John Edwards said.

“We feel sorry for the staff. We stayed mainly for them. Even if our family calls us every day to tell us to come back.”

At the beach, Ted and Dawn from Suffolk in eastern England laid down fresh flowers in memory of the dead.

“We did pack (to leave early) but we changed our minds,” Dawn told AFP.

“I have been afraid to get out of the complex but one has to try… These things, you see them on TV, you hear about it, but you never think you’ll live it.”