Home Face Off The Human Albatross 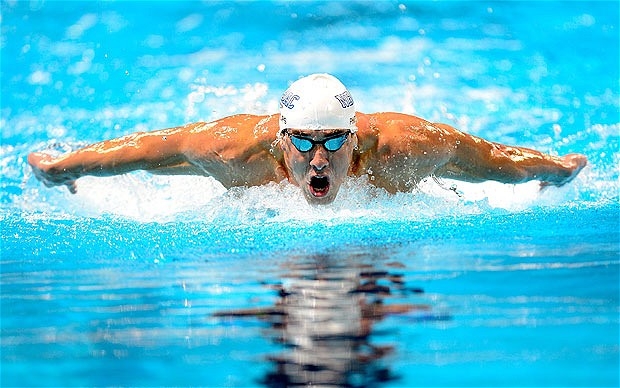 Invincible, incredible and impeccable, the Flying Fish is the most decorated Olympian of all time. Tried and tested, he has proved that anything is possible.Â

At 6 feet 4 inches,Â Michael PhelpsÂ swam to every award and medal which the swimming world has to offer. The Baltimore Bullet has broken 39 world records. The Americanâ€™s home town duly named a street in his honour â€“ The Michael Phelps Way.

Michael Fred Phelps II was born on June 30, 1985 in Baltimore, Maryland. Diagnosed with Attention Deficit disorder, Phelps was directed towards swimming in 1992 at the age of just seven in order to provide him with an outlet for his unbounded energy.His ancestry includes English, Irish, Scottish, Welsh, and German. Phelps graduated from Towson High School in 2003.

Phelps began to train at the North Baltimore Aquatic Club under Coach Bob Bowman at the age of ten. His rapid improvement culminated in his qualifying for the 2000 Summer Olympics at the age of 15, becoming the youngest male to make a US Olympic swim team in 68 years.

In the 2004 Summer Olympics in Athens, he won six Gold medals and two Bronze. World Championships and Pan Pacific Championships came and went in the ensuing years with Phelps mostly continuing his dominance.

In 2012 London Olympics, Phelps’s Olympic medal count rose to 22, and was honoured as the most decorated Olympian ever by FINA.

After the London Olympics, Phelps announced he was retiring from his sport but came out of retirement in 2014 participating in Arena Grand Prix.

After the 2008 Olympics, Phelps used his $1 million Speedo bonus to set up the Michael Phelps Foundation which focuses on growing the sport of swimming and promoting healthier lifestyles.

In 2010, the Michael Phelps Foundation, the Michael Phelps Swim School and KidsHealth.org developed and nationally piloted the “im” program for Boys & Girls Club members which teaches children the importance of being active and healthy, with a focus on the sport of swimming.

Sports Illustrated Sportsman of the Year: 2008