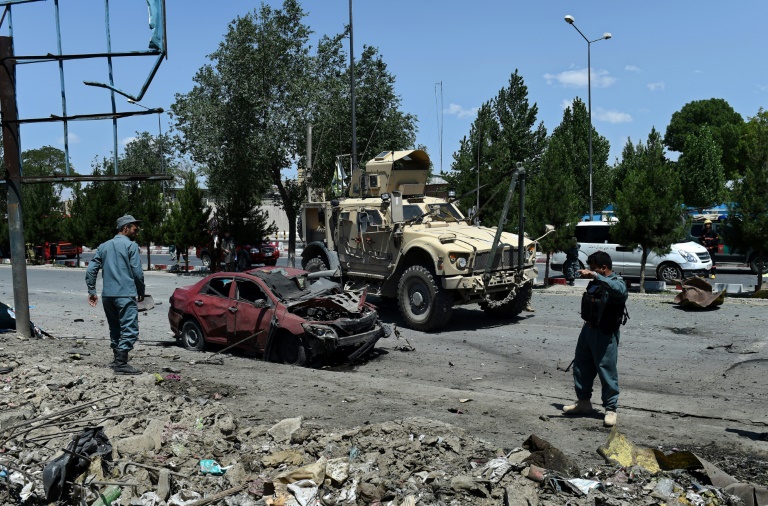 Suicide attackers Tuesday targeted NATO troops in Kabul and a police headquarters in restive southern Afghanistan, killing three people and wounding at least 60 as the Taliban’s bloody summer offensive showed no signs of letting up.

A powerful blast echoed around the Afghan capital as a suicide car bomber hit a NATO military convoy on the main road to the airport, around 500 metres (550 yards) from the US embassy, killing at least one Afghan civilian and wounding around 20.

Hours earlier at least two civilians were killed when a suicide truck bomb detonated at the gate of the police headquarters in Lashkar Gah, the capital of volatile Helmand province.

Afghan troops and police are battling the Taliban alone in the first “fighting season” since NATO ended its combat mission and left local forces to take charge of security.

Tuesday’s violence came less than two days after 11 soldiers were killed in a Taliban ambush in the normally relatively peaceful western province of Herat.

“It was a suicide car bomber targeting a convoy of foreign forces in Kabul,” interior ministry spokesman Sediq Sediqqi said.

“In the aftermath of today’s terrorist attack in Kabul, one was killed and 22 more injured, all civilians,” he said.

A spokeswoman for the NATO mission in Afghanistan, Captain Susan Harrington, confirmed a convoy had been attacked and said two coalition personnel had been wounded.

“Two attackers were killed in the explosion while the third one was injured and as he tried to escape the police shot him,” he said.

Provincial spokesman Omar Zhwak said most of the wounded were hit inside their homes by flying glass.

A doctor at the emergency hospital in Lashkar Gah said 40 civilians were brought to the hospital.

The Taliban launched their annual spring-summer offensive in late April, vowing nationwide attacks in what is expected to be the bloodiest summer for a decade.

After the Helmand attack a small blast hit a military vehicle in Kabul, police said, though there were no casualties.

Stretched on multiple fronts and facing record casualties, Afghan forces are struggling to rein in the militants even as the government makes repeated efforts to jump-start peace negotiations.

The Taliban’s annual summer offensive has sent civilian and military casualties soaring and threatened major cities for the first time in a decade.

A fierce battle has been going on in the northern province of Kunduz, where Afghan forces last week recaptured a key district from Taliban fighters who had threatened to overrun their first provincial capital since being toppled from power in 2001.

Last week also saw the militants launch a brazen assault on parliament in Kabul, detonating a car bomb at the entrance and trading fire with security forces.

Police and soldiers beat back the attack with only two civilians killed, but the incident highlighted the Taliban’s continuing ability to strike even at the heart of the heavily-secured capital.