Home World Rousseff urges investors to get on Brazil bandwagon 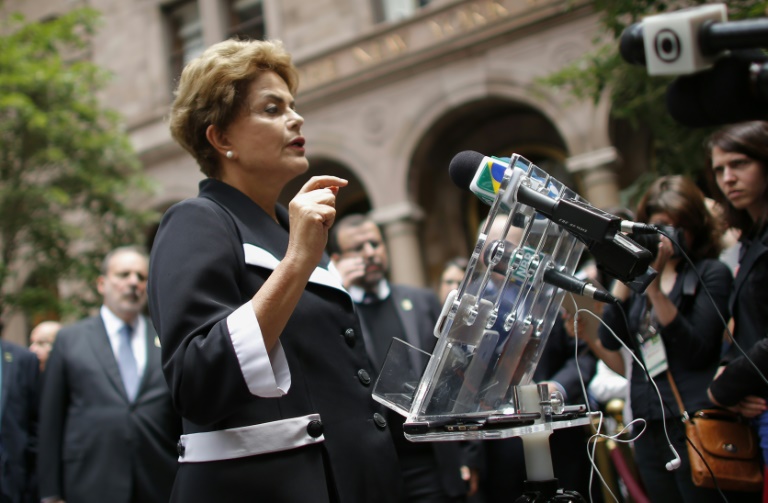 Brazil’s economy is ready for a new period of growth after sputtering for years, and investors should get on board now, President Dilma Rousseff said Monday.

Brazil was once the star of the world’s emerging economies, posting torrid economic growth that brought many among its legions of poor into the middle class.

Its economy is the biggest in Latin America and the seventh largest in the world.

However, now it has posted only tepid growth for the past four years, and the government forecasts it will close this year with a 1.2 percent contraction.

Rousseff, visiting the United States since late Saturday, addressed a seminar organized by her government on plans for a major infrastructure program with hundreds of contracts in the offing.

“We are building the foundations of a new cycle of enhanced growth, and inflationary control measures, as well as budgetary balance, are part of this strategy,” she said.

With the government in the red, Rousseff pushed through parliament a series of austerity measures including a budget cut of $23.3 billion.

She also launched a program to finance the farm sector, in which Brazil is one of the world’s leaders, and a $64 billion plan for major public works projects, the focus of Monday’s seminar.

Brazil hopes to “encourage international entrepreneurs to take advantage of the business and investment opportunities that are emerging in Brazil, especially in infrastructure,” the president said.

The United States is the top foreign investor in Brazil with a total of $116 billion and the second trading partner after China with exchanges totaling $62 billion.

After reviewing certain economic fundamentals of her government, Rousseff concluded: “we must transform the potential demand for better infrastructure into projects that are viable for the private capital.”

The Brazilian program calls for construction of ports, airports, roads and railways.

She is due to meet with President Barack Obama on Tuesday.

Revelations two years ago that the US National Security Agency electronically eavesdropped on Rousseff’s email and other communications prompted her to angrily call off an official visit to Washington that had been set for October 2013.