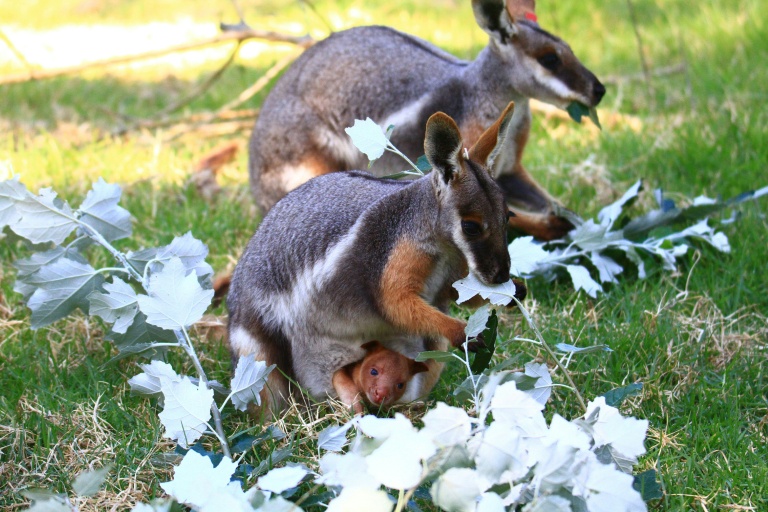 Australian zookeepers Tuesday said they had successfully fostered an orphaned tree kangaroo with a surrogate wallaby in a rare case after its mother was crushed by a branch.

The Goodfellow’s tree kangaroo, named Makaia by its carers at Adelaide Zoo in South Australia, was just five weeks old and at risk of dying after its three-year-old mother was killed by a falling tree branch in November.

In a bid to save the joey, which was too young to be hand-reared, zookeepers placed the baby marsupial in the pouch of a female yellow-foot rock wallaby in a “cross-fostering” technique they hoped would help it stay alive.

“We were so excited when we confirmed the joey had made it past the first critical 24-hour period,” said Adelaide Zoo’s team leader of natives, Gayl Males.

“We were uncertain as to whether the joey was going to be accepted. The joey… first popped its head out of the pouch around the end of January.

“It was certainly a sight to see a tree kangaroo joey, with its reddish-tan fur, bright blue eyes and long claws riding around in a wallaby.”

They are classified as endangered by the International Union for the Conservation of Nature, with the species under threat from habitat loss and overhunting.

The zoo’s veterinarian David McLelland said, as far as he knew, cross-fostering had not been attempted with a tree kangaroo before.

“We’ve had great success over the years’ cross-fostering between wallaby species, but the specialised breeding technique has never been used on a tree kangaroo,” McLelland said.

“Not only are tree kangaroos distant relatives of wallabies, they also have many behavioural and physical differences. We had no idea if the yellow-foot rock wallaby would accept the tree kangaroo joey, but if we wanted to save the joey we had to try our luck.”

Makaia lived with his surrogate mother for three-and-a-half months before Males took over caring for him.

Gestation takes about 45 days for Goodfellow’s tree kangaroos. The babies spend their first few months in their mother’s pouch, suckling, and then leave for progressively longer periods of time until fully independent.