Home Sports No tears as Hewitt says farewell to Wimbledon 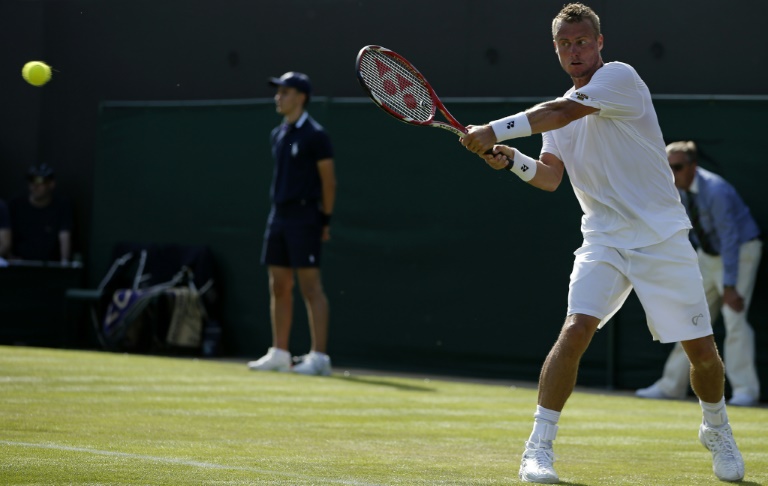 Lleyton Hewitt admitted he just managed to hold back the tears as the former Wimbledon champion’s swansong ended in a frustrating five-set defeat against Jarkko Nieminen on Monday.

Hewitt is embarking on a prolonged farewell tour before retiring after next year’s Australian Open and he was hoping for one last hurrah on his 17th and final visit to the All England Club.

Denied a second round clash against world number one Novak Djokovic, Hewitt was emotional as he took his final curtain call but, living up to his tough-guy image, he was determined not to cry.

“I probably don’t cry easily, no. I haven’t cried today, if that’s what you’re asking. Pretty close, but not quite,” Hewitt said.

“You try and suck it in as much as possible at the end of the match. But you’re not probably thinking as clearly as you’d like to be.

“It never entered my mind that this could be the last time you serve or play a game in the Championships. So it’s kind of a strange feeling in a lot of ways.

“But the crowd and everything, it was fantastic. I wouldn’t have wanted it any other way.”

Hewitt, the injury-plagued former world number one, whose ranking has plunged to 118 since he lifted the Wimbledon title in 2002, was relieved to have put up a good showing in his last singles match at his favourite Grand Slam.

“That pretty much sums up my career, I guess, my mentality, never-say-die attitude. I’ve lived for that the 18, 19 years I’ve been on tour,” Hewitt said.

“I’m proud of myself that I left it all out there.”

Despite losing six of his seven matches in 2015, Hewitt had been granted a wildcard by nostalgic Wimbledon chiefs — giving him the chance for a sentimental last tour of the All England Club with his wife Bec and their three children.

“It’s been great to be able to soak up the atmosphere, especially the last week preparing for the tournament,” he said.

“The kids are all old enough to understand what it means and everyone in the locker room and the club has been so nice to us.”

Hewitt never quite fulfilled the promise that saw him win the US Open in 2001 and then triumph at Wimbledon a year later.

He lost US Open and Australian Open finals in the following years before a series of injuries led to operations that curtailed his career at the highest level.

But, asked when he had been happiest in his career, he said “Obviously now, with a beautiful wife and three kids. I preferred my body back then!,”

“It’s hard to beat winning though. You work your whole life to have an opportunity to play on the final Sunday here in Wimbledon, to have a chance of holding up that trophy.

“Nothing can really compare to that in tennis. That’s a no-brainer.”

Hewitt is due to play with Australian teenager Thanasi Kokkinakis in the Wimbledon doubles, but he knows his days as a competitor on the lawns of south-west London are coming to an end.

He has been determined to soak up the atmosphere one last time, although he plans to return in a non-playing capacity in the future.

“Even yesterday I just went and sat in the stands of Centre Court, just soaked it up and listened to music in there,” he said.

“For me, it’s the home of tennis. I don’t get the same feeling walking into any other grounds in the world than I do here. I get goosebumps walking into this place.

“I’m so fortunate I go into the locker room whenever I like. That’s something I can always come back and enjoy over the years.”