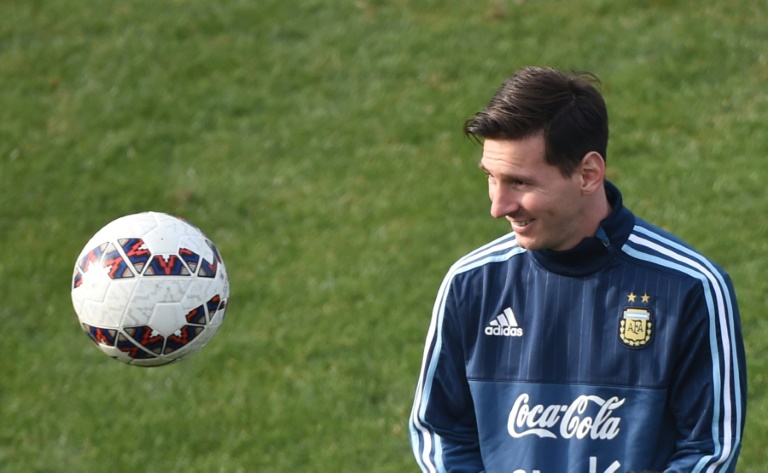 Lionel Messi is walking a disciplinary tightrope as goal-shy favourites Argentina take on Paraguay here Tuesday with a place in the final of the Copa America at stake.

Messi is one of three key Argentina players who are only one yellow card away from suspension as the South American giants prepare for a rematch against Paraguay, who held them to a 2-2 draw in the group phase.

The Barcelona superstar picked up a mystifying booking in the quarter-final victory over Colombia and will now need to tread carefully to avoid a tournament-ending caution in the last four.

Defensive midfield linchpin Javier Mascherano and Manchester City striker Sergio Aguero are also on a booking heading into Tuesday’s game in Concepcion, which kicks off at 8.30pm local time (2330 GMT).

The winner will face Chile in Saturday’s final after the hosts downed Peru 2-1 in Monday’s first semi-final.

Argentina coach Gerardo Martino, who coached Paraguay for five years between 2006 and 2011, admits he would rather have faced any other team in the last four, citing deep ties with many of their players.

“I would have preferred not to play against Paraguay,” Martino said.

“We have many things in common, a lot of feelings, a lot of work, a lot of shared experiences — the World Cup, the Copa America. I’ve got a close relationship with many of these kids,” Martino said.

Martino was at the helm when Paraguay finished runners-up of the 2011 Copa America and also led the team on their memorable run to the quarter-finals of the 2010 World Cup.

“Five or six have played major tournaments together, developed together. It made me grow as a coach, and it is clear that I owe a lot of what has happened to me since then to what we achieved together,” added Martino, who took over as Argentina coach following last year’s World Cup.

Martino is also concerned by Argentina’s goal drought which has seen them score just four goals in four games at the Copa America so far, despite boasting, on paper at least, one of the most potent collections of attacking players in international football.

A prolific scorer for Barcelona — 58 goals in 57 matches last season — even Messi has been afflicted with the goal curse, not scoring for Argentina in open play in a whopping 828 minutes.

Martino admitted Argentina’s failure to hit the target was a concern, but is confident it is mostly down to bad luck.

“It is clear we have a problem finishing which affects the entire team,” Martino said. “But it’s the result of bad luck more than anything else. We are creating chances to score.”

Argentina launched their campaign against the Paraguayans in a bizarre game they looked to be in total control of until a second half collapse.

Martino’s men dominated their opponents in a one-sided first half, quickly moving into a 2-0 lead, before crumbling when Paraguay opted for a more attacking approach.

Martino meanwhile acknowledged that the threat of suspension hanging over Messi, Aguero and Mascherano was a concern.

“It is a situation we are aware of,” Martino said.

“And in Leo’s case we are talking about the best player in the world. But we hope that it won’t happen to him, to Kun (Aguero) or to Javier (Mascherano).”