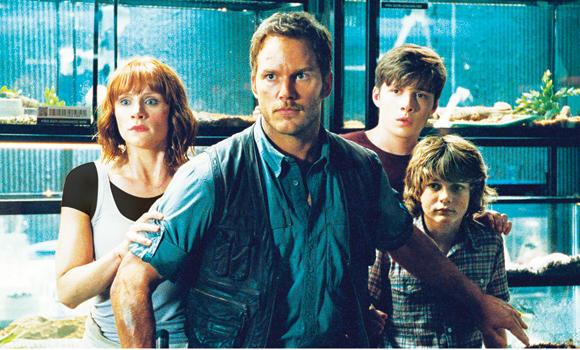 London: After surpassing a number of records, including highest-grossing opening weekend of all-time, the resurgence of the Jurassic Park â€“ â€˜Jurassic Worldâ€™ â€“ continued its nationwide box-office domination for the third consecutive week.

The fourth flick in the Jurassic series, â€˜Jurassic Worldâ€™ snapped up another victory with $54.5 million placing Pixarâ€™s â€˜Inside Outâ€™ in second place at the North American box office.

â€˜Jurassic Worldâ€™ completed its third weekend in the US and Canadian cinemas with an overall haul of $500 million, shattering US and worldwide records, according to box office tracker Exhibitor Relations.

The film â€˜Inside Outâ€™ is a well-received animated tale depicting the emotions inside the mind of a young girl, which pulled in another $52.3 million in its second week. The movie â€“ which is generating major Oscar buzz â€“ has so far taken in $185 million in North America.

‘Ted 2’, the sequel to Seth MacFarlane’s 2012 hugely successful raunchy comedy, opened in third place at $33.5 million. Another new film, ‘Maxâ€™, about a boy who adopts an ex-military dog that had served in Afghanistan, opened in fourth place with $12.2 million, despite scathing reviews and a low 38% critics’ approval rating on Rotten Tomatoes.

Rounding out the top 10 was â€˜Avengers: Age of Ultron,â€™ which pulled in another $1.7 million, bringing its total haul to $452.5 million since its official US release in early May.