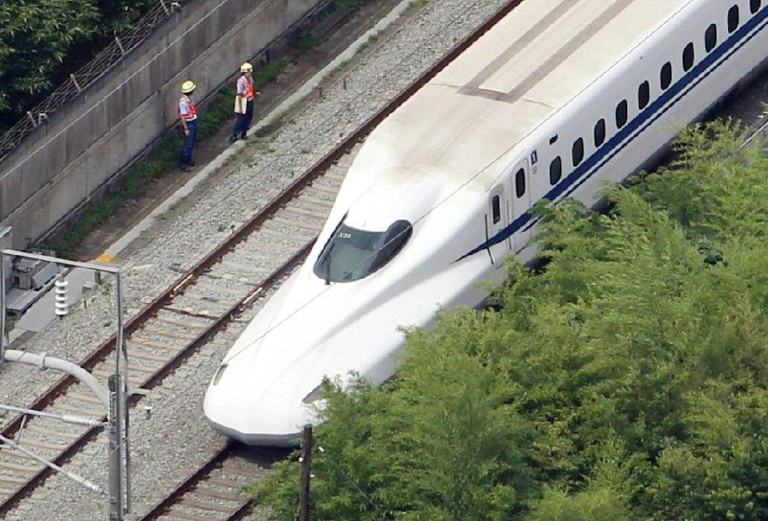 A man set himself ablaze on board a moving bullet train in Japan Tuesday, killing himself and a woman, in an unprecedented incident on a network with an enviable safety record.

Several other passengers were hurt after the man doused himself in flammable liquid and sparked a cigarette lighter at the front of the train as it hurtled through the countryside around 70 kilometres (45 miles) southwest of Tokyo.

Reports said a blast was heard from a toilet stall, filling the front carriage with choking white smoke, and bringing the train to an emergency stop as passengers rushed through carriages to get away.

Media reported that the driver of the train, which had more than 800 passengers on board, found the still-burning body of the man. The train’s top speed is 300 kilometres per hour but it was unclear how fast it was travelling at the time.

“We have been informed that there was a passenger in a car on the train who covered him or herself with oil and set it on fire,” a spokesman for operator JR Central told AFP.

The train involved in Tuesday’s incident — a super-fast Nozomi bullet train — was travelling from Tokyo towards Osaka when the blaze erupted near Odawara, southwest of the capital.

Footage from inside the train after the fire showed passengers blinking and coughing as they crawled along the aisle to evacuate.

Several had soot-blackened faces and some seemed confused and upset.

“In the very front of the first car, he emptied and sprinkled (liquid) from a plastic container… then he poured it on his body and set it alight,” one man said.

Another passenger told a journalist he had spoken to the man moments before he set himself on fire.

“He told me ‘Go to the back, it’s dangerous’. I wasn’t sure what was happening. I put my stuff away and thought about walking toward the back, then he pulled out a plastic tank,” the man said.

“Inside, there was an orange liquid. I thought it was suspicious. I asked him what it was. He said, ‘Never mind, never mind. Go to the back’.”

One report suggested the man — identified as a 71-year-old — had tried to give other passengers money in low-denomination notes before setting himself ablaze.

An official at the local disaster prevention office said the man had died at the scene, while a woman, who was found at the opposite end of the carriage, was taken to hospital but later declared dead.

He said three more men were in serious condition, while three others were badly hurt.

Twenty other passengers needed treatment, many for smoke inhalation.

In the hours after the incident, television pictures showed all the doors on the stationary train open and passengers being carried out on stretchers.

Prime Minister Shinzo Abe set up a task force to co-ordinate government responses, and all bullet trains between Tokyo and Nagoya were suspended for several hours.

Unlike at airports or train systems in other countries, there are no security checks for passengers boarding shinkansen in Japan.

The motive behind Tuesday’s public suicide was not immediately clear. Self-immolations are relatively rare in Japan, a country where the culture of political protest is subdued.

In November 2014 a man reportedly burned himself to death at a park in the heart of Tokyo in an apparent protest against Japan’s controversial move to expand the role of its military.

Another man set himself ablaze in June of that year on a pedestrian walkway in Shinjuku, one of Tokyo’s busiest districts, after giving a speech opposing Abe’s plan to reform the pacifist constitution.

While Japan has a relatively high suicide rate, mental illness still carries a considerable stigma, and critics say support networks for those suffering from psychological problems are inadequate.

In a bid to reduce the number of people throwing themselves in front of trains, some Japanese rail companies demand compensation from surviving family members which can run into tens of thousands of dollars.

It was not immediately clear if this policy could apply for Tuesday’s episode.

Japan’s ultra-efficient shinkansen train network, inaugurated in 1964 as Tokyo readied to host the Olympic Games, now connects cities along the length and breadth of the country.

Despite the huge volume of passengers it serves, it operates with enviable punctuality. It also has an unparalleled safety record, with no one having been killed in a crash in its half-century of service.