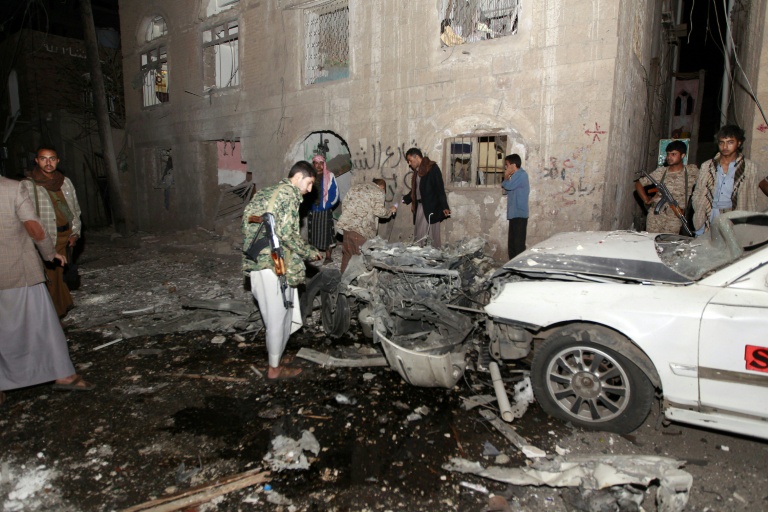 An attack on Huthi rebel leaders in Yemen’s capital claimed by the Islamic State group killed at least 28 people, medics said Tuesday, the latest anti-Shiite assault by the Sunni extremists.

Yemen was previously the preserve of IS’s jihadist rival Al-Qaeda, which controls swathes of the south and east, but since March the group has claimed a string of high-profile attacks.

The car bomb late Monday targeted Huthi rebel chief brothers Faycal and Hamid Jayache during a gathering to mourn the death of a family member, a security source said.

Eight women were among the dead.

Huthi rebels closed down the surrounding area in the centre of Sanaa after the attack, only allowing through emergency services to help evacuate the victims, witnesses said.

The explosion blew a crater in the road, took chunks out of nearby walls and left debris strewn across the street.

In a statement posted online, IS said it had organised the attack on what it called a “Shiite nest”.

The jihadist group considers Shiites heretics and has repeatedly targeted them not only in Yemen but in countries across the region.

Just Friday, a Saudi IS suicide bomber killed 26 people and wounded 227 in a Shiite mosque in Kuwait.

In Yemen, IS claimed a car bombing that killed two people outside a Shiite mosque in Sanaa on June 20 and a series of attacks in the capital four days earlier that killed 31.

The jihadist group, which on Monday marked the first anniversary of the declaration of its “caliphate” in Iraq and Syria, launched its Yemen campaign in March with a series of bombings of Shiite mosques that killed 142 people.

The deadly attacks have overshadowed the operations of IS’s rival in Yemen, Al-Qaeda in the Arabian Peninsula.

AQAP has taken advantage of the Huthi rebellion to consolidate its grip of the southeastern province of Hadramawt, overrunning its capital Mukalla in March.

And it is still regarded as the network’s most dangerous branch by Washington, which has kept up a drone war against its leaders inside Yemen.

But analysts said that IS was now clearly in the ascendant.

IS is “in the process of supplanting AQAP, which is becoming just one of a number of forces in the Sunni tribal camp in southern Yemen,” said Mathieu Guidere, professor of Islamic studies at the University of Toulouse in France.

The Iran-backed Huthi rebels have seized vast swathes of the country since launching an offensive in July 2014, forcing President Abedrabbo Mansour Hadi to flee to Saudi Arabia.

Neither peace talks in Geneva nor a Saudi-led air campaign begun in March have driven them from power and they remain locked in battle with pro-government fighters, Sunni tribesmen and southern separatists.

Yemen’s official Saba news agency, which is controlled by the Huthis, reported early Tuesday that the rebels had launched a Scud missile at the Al-Salil military base in Riyadh province deep inside Saudi Arabia.

“The missile is in response to the aggression of Saudi Arabia, which is increasing its criminal air raids against our country,” Saba reported, citing a military spokesman.

“This is another message to the forces of oppression,” he added, promising “new surprises in the coming days.”

Saudi Arabia did not immediately confirm or deny the missile attack.

But it said that a Saudi soldier had been killed on Monday by rebel fire across the border.

At least 45 people have been killed by such fire since March, among them civilians as well as troops.

In the battleground southern port of Aden, Yemen’s second city, fighting raged Tuesday between the rebels and their opponents.

A pregnant woman and two children were among 13 people killed over the past 48 hours, medics said. Another 216 people were wounded.

Oil tanks at the city’s refinery were still ablaze after being hit by rebel fire on Saturday.

Saudi-led aircraft carried out 20 strikes in support of the exiled president’s loyalists, a local official said.

Another local official accused the rebels of firing on a Qatari aid ship preventing it from docking in the city, which is in desperate need of relief supplies.