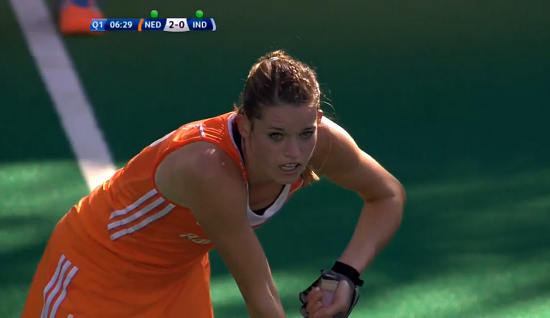 Antwerp:Â Indian eves crashed out in the quarterfinals of theÂ Hockey World League SemifinalsÂ after they were drubbed 0-7 by world champions The Netherlands at the KHC Dragons Stadium, in Antwerp on Tuesday.Â

Swept away by the early onslaught in the quarterfinal contest, the Indian women’s hockey team’s defence wilted under the pace set by the Dutch girls, for whom Caia van Maasakker converted three penalty corners and Lidewij Walten scored twice.Â

India, ranked No 13 in the world, were no challenge for World Cup and Olympic title holders The Netherlands, whose goal was threatened only twice through two penalty corners thatÂ IndiaÂ forced in the second half.Â

In the semifinal encounter, The Netherlands will take on Australia, silver medalists at the World Cup last year, who prevailed 2-0 over minnowsÂ ItalyÂ in the quarterfinals.Â

India will face Italy in the fifth to eight classification spots.Â

The Dutch goal rampage began in the opening minute when Naomi van As dribbled along the goal-line from the right and beat Indian custodian Savita with a deft scoop.Â

India managed to break into the rival circle in the fourth minute, when Vandana Katariya shot diagonally into the goalkeeper, before the Dutch scored again in the ninth minute from their first penalty corner. Willemijn Bos’s drive was deflected in by Walten.Â

The Dutch were denied a goal on their second penalty corner in the last minute of the first quarter before Van Maasakker scored the first of her goals, with a low drag-flick into the right corner of the board in the 16th minute.