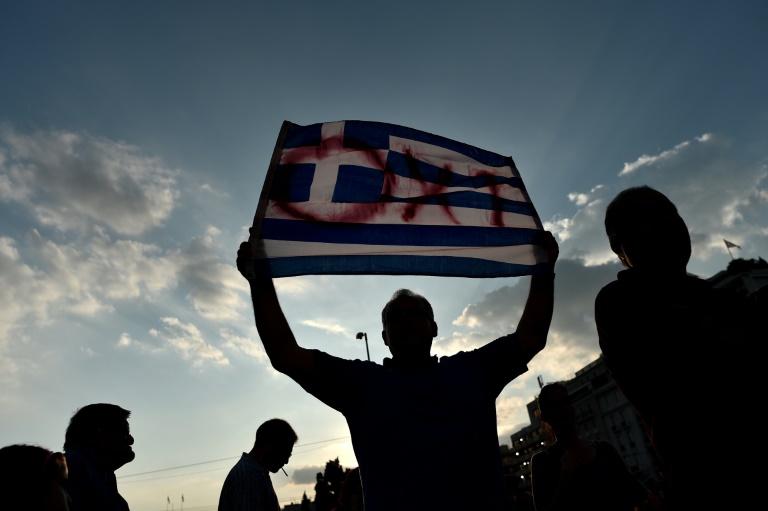 European leaders Monday pleaded with Greek voters to back hotly disputed bailout proposals in a crunch referendum or face leaving the euro as bank closures left many in Greece scrambling to find cash.

On the eve of an expected debt default that could set Greece on the path to a euro exit, Prime Minister Alexis Tsipras sought to calm nerves by leaving the door open to talks, saying the July 5 plebiscite on creditors’ latest cash-for-reform plans would leave the country “better armed” in the fight for a debt deal.

But the premier also made clear that Greece was unable to make the 1.5-billion-euro payment due to the International Monetary Fund on Tuesday, the same day its international bailout programme expires.

“(How) is it possible the creditors are waiting for the IMF payment while our banks are being suffocated?” he said in a late-evening interview on ERT television.

Earlier on Monday, an emotional EU chief Jean-Claude Juncker bitterly criticised Tsipras, saying he felt “betrayed” by the leftist Syriza government’s behaviour and adding it was time to tell voters “the truth”.

Other EU leaders including Germany’s Angela Merkel France’s Francois Hollande and Italy’s Matteo Renzi put up a united front, stressing that the bailout referendum was effectively a vote on Greece’s place in the euro.

“A ‘No’ would mean, regardless of the question posed, that Greece had said no to Europe,” said Juncker, previously Tsipras’s closest — and sometimes only — ally in five months of debt talks.

The rhetoric came after the Greek debt saga took a dramatic turn at the weekend, with the European Central Bank refusing to increase financial support for Greek banks after Tsipras announced the shock referendum and bailout negotiations with creditors collapsed.

In a bid to avert a panicked run on banks, the Greek government imposed capital controls and ordered banks and the stock exchange to close for a week from Monday.

The uncertainty over Greece’s future sparked long queues at ATMs in the country, where anxious citizens could only withdraw 60 euros ($66) per day, while global stock markets saw red.

“I feel like I’m voting for sudden death or slow death,” said 38-year-old office manager Maria in Athens, who wants Greece to stay in the EU. “It feels like it’s game over.”

Aware a Greek exit from the eurozone would leave a permanent scar on the EU, its leaders have indicated they could still be open to an agreement.

Hollande and US President Barack Obama agreed in a telephone call to “combine their efforts to favour a return to talks,” a statement from the French presidency said.

Eurogroup head Jeroen Dijsselbloem also said further talks were possible, while Merkel said any new negotiations with Greece should come after the referendum.

Tsipras said he too was ready to return to the table after the popular vote.

“Our aim is for the referendum to be followed by negotiations for which we will be better armed,” he told ERT television, vowing to “respect the decision” of the Greek people.

Asked whether he would resign if Greeks rejected his plea for a “No” vote, he answered that he was not a prime minister who would stay in place “in all weathers”.

But Tsipras’s hand was strengthened by a show of support of more than 17,000 people who took the streets in Athens and the country’s second city of Thessaloniki to protest against the latest bailout proposals.

“Our lives do not belong to the creditors!” read banners held aloft by demonstrators in the capital.

Greece, which has received 240 billion euros of bailout cash since 2010, boasts a debt of nearly 180 percent of GDP.

Tsipras, whose Syriza party came to power in January on an anti-austerity platform, has advised voters against backing a deal he said spelt further “humiliation” for Greece.

The country has already endured five years of recession, while unemployment has more than doubled from 10.3 percent in 2009 to 25.6 percent this year and pensions and benefits were roughly halved between 2010 and 2014.

Global stock markets were sharply down Monday over fears of a Grexit.

But it was weaker eurozone nations that were hardest hit, with both Lisbon and Milan plunging more than 5 percent and Madrid down 4.56 percent.