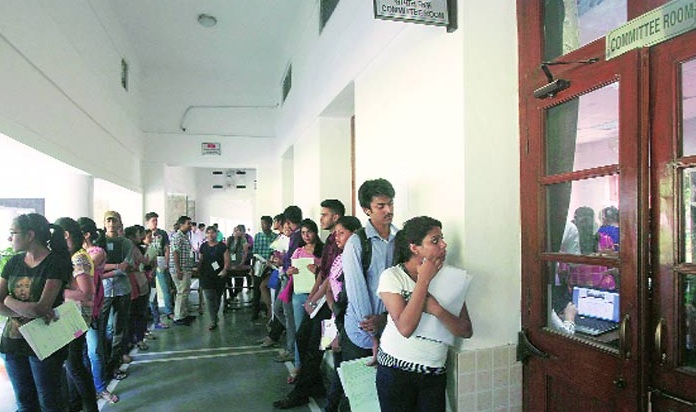 New Delhi:Â Â Delhi University on monday announced the second cut-off list for admission to its undergraduate programmes, with a marginal drop in its percentages even as various colleges closed the enrollment to popular courses such as BCom Honours and Economics Honours for various categories.

College of Vocational Studies and Indraprastha College for Women which had kept the percentage requirement of perfect 100 for admission to BSc Computer Science (Hons) in the first list, revised it to 93-99.5% and 95.5-100% respectively.

While Sri Ram College of Commerce closed admission to BCom (Hons) for General category, it has kept a ceiling of 97.75% for Economics (Hons), just 0.25 less than the first cut-off.

Miranada House has also closed admission to its Honors courses in Geography, History and Political Science.

Kirori Mal College has also closed admissions to its Honours courses in Urdu, Bengali and BCom and BA Programme.

Admissions at Ramjas College are closed for Zoology, Botany and Life Sciences Courses while the cut-offs for Chemistry (H), Maths (H), Physics (H),Â  Statistics (H) at 95.56, 96, 96 and 96.5 respectively.

For admission to Sri Venkateshwara college, students are required to have 94.75% for Chemistry and 96% for Maths and Physics.

Cut-offs to Delhi University’s undergraduate courses had yet again “sky-rocketed” with two colleges this time setting the threshold at 100 per cent for admission to the BSc (Computer Science) course.

Although only the College of Vocational Studies and Indraprastha College for Women had announced 100% cut-off for the first list, the required percentage came to beyond 100 for a few courses and categories in other colleges as well after taking into account certain “hidden, additional criterion”.

While the varsity has done away with stream-wise cut-offs from this academic session, stream change students applying for BCom will attract a disadvantage of 2.5%.

Hence, those with stream change clause applying for BCom honours at LSR and Ramjas, Political Science in Hindu, Kirori Mal and LSR and History in Hindu, too, needed 100% and above marks for admission under the first cut off list, thanks to the 2.5% penalty.

Despite, the high cut-offs and various penalty clauses the university officials had maintained that students need not panic as there are plenty of seats up for grab and the cut-offs have been kept high to avoid over-admissions.

According to DU guidelines, the eligible candidates who meet the requirements notified in the second cut-off list are required to complete the admission formalities till July 2.