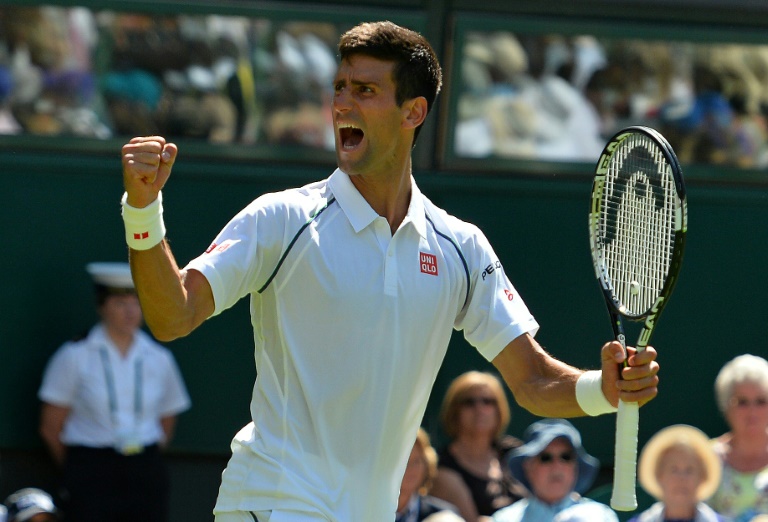 Defending champion Djokovic enjoyed a 6-4, 6-4, 6-4 win over Germany’s Philipp Kohlschreiber with crucial breaks in the ninth game of each set.

But the world number one and top seed again found himself defending allegations that coach Boris Becker is using various means to coach him from the sidelines, a practice which is banned.

The usually affable Serb added: “There are certain ways of communication which is encouragement, which is support, which is understanding the moment when to clap or say something that can lift my energy up, that can kind of motivate me to play a certain point. But it’s all within the rules.”

Djokovic, playing his first match since his defeat to Stan Wawrinka in the French Open final three weeks ago ended his hopes of completing a career Grand Slam, hit 12 aces and 36 winners past world number 33 Kohlschreiber.

It was Hewitt’s last singles match at the tournament — and 44th five-setter at the majors — as he plans to retire after next year’s Australian Open.

“I probably don’t cry easily — pretty close today, but not quite,” said Hewitt.

Top seed Serena Williams, bidding to become the first woman since Steffi Graf in 1988 to wrap up all four majors in one season, endured a nervy start and was warned for swearing before completing a 6-4, 6-1 win over Margarita Gasparyan, the world number 113 from Russia who has never won a tour-level match in four years as a professional.

“It feels good so far. Just one match but it feels good just to be back here at Wimbledon. I’ve done so well here in the past so I’ll always have so many good memories,” said the 33-year-old American after her 73rd Wimbledon match win secured her a second round clash against Hungary’s Timea Babos.

Fourth seed Sharapova also reached the second round with a 6-2, 6-2 win over Britain’s Johanna Konta.

Sharapova, the 2004 champion, will face Dutch qualifier Richel Hogenkamp for a place in the last 32.

“I was quite pleased with the way things went. It was my first competitive match in about four weeks, so I just wanted to start off really strong,” said the Russian.

But hers wasn’t the fastest win of the day as German 14th seed Andrea Petkovic needed just 38 minutes to see off Shelby Rogers of the United States.

US Open champion Marin Cilic, the ninth seeded Croatian and a quarter-finalist at Wimbledon last year, got past Japanese qualifier Hiroki Moriya 6-3, 6-2, 7-6 (7/4).