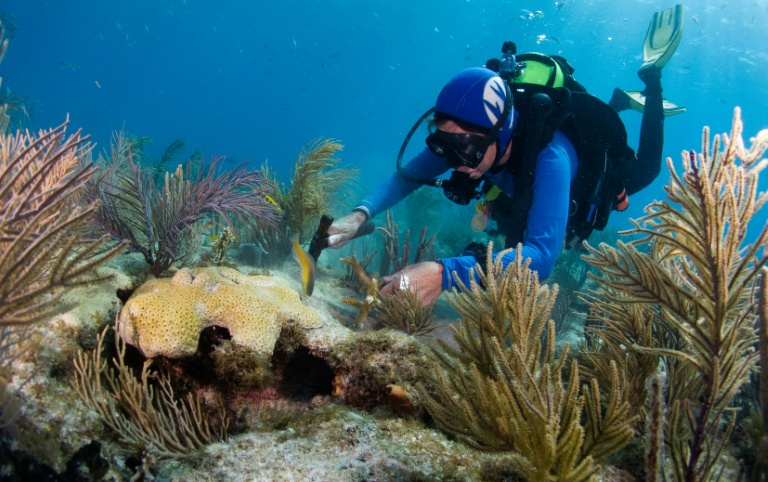 Coral reefs are fragile and in danger worldwide, but a growing movement to restore them is based on the science of breaking off pieces in order to grow more, known as coral gardening.

It works like this: marine biologists cut off the tips of live branching corals, hang the pieces on man-made underwater trees where they grow, and later “outplant” them on real reefs on the ocean floor.

After years of trial and error, scientists in Florida are now bringing their methods to the public — via diving trips, ecotourism outings and summer camps for teens — to counter the harmful effects of climate change, pollution and industrial development.

“It is just like if you had a rosebush in your garden. As you prune that rosebush back, it grows back healthier, bushier, a little more lively,” explains Stephanie Schopmeyer, senior research associate at the University of Miami Rosenstiel School of Marine Science, which runs a program called Rescue a Reef that allows citizen scientists to join the project.

“Corals that are fragmented actually grow back faster and with more branches,” she said.

On a recent outing, Schopmeyer and about a dozen other divers and snorkelers spent a sunny spring morning on the water, traveling first by boat to an underwater nursery in Biscayne Bay where they scrubbed algae off the man-made trees on which Staghorn corals hang, and later to another area where they planted nursery-grown bits of coral on an existing reef.

Certified scuba divers did the underwater work, while a handful of tourists and students helped make cookies — small discs on which they use epoxy to affix finger-sized pieces of coral. Then, the volunteers snorkeled, watching the divers nail their handiwork on the ocean floor.

Nicole Besemer, a graduate student at the University of Miami, says she was surprised to learn that corals can survive and thrive after being cut and nailed in a new place.

“As a diver in south Florida, I want to make sure that my reefs are as healthy as they can be,” Besemer says.

“I know they are not what they used to be.”

Corals may look like rocks or plants but they are actually animals in the same family as jellyfish and anemones. Each individual coral is called a polyp, and the reef grows as polyps grow copies of themselves. Most corals reproduce by releasing eggs and sperm into the water.

Coral reefs are important because they provide habitat and food for fish, turtles, seahorses, sea urchins and other creatures.

But the reefs are struggling, with their numbers down 50-95 percent in some parts of the world.

Pollution cuts off their light and food supply, overfishing removes the creatures that keep them clean and healthy, development and dredging cause sediment to smother them, and ocean acidification makes it harder for them to grow.

Storms can also kill them. Diego Lirman, an associate professor of marine biology and ecology at the University of Miami, did his dissertation some 30 years ago on the impact of hurricanes on a place nearby called Elkhorn Reef.

Now, he says, there are no Elkhorn corals left there.

“It got to the point where I was getting tired of just watching things die and learning about them in the process. I wanted to be able to do something to recover them,” says Lirman.

He credits scientists in nations like Israel, Fiji, Indonesia and the Philippines for coming up with the coral gardening techniques that Florida researchers are now using, and says sharing knowledge across borders helped everyone perfect their techniques.

A major part of the movement in Florida and the Caribbean is led by the Coral Restoration Foundation (CRF), which employs about 10 staff and leads an army of volunteers on regular expeditions.

CRF and the University of Miami’s reef programs were initially funded in large part by the Recovery Act of 2009, a White House initiative to kickstart the US economy following the global financial crisis. Donations have poured in as well.

“We are kind of at the explosive growth stage,” says CRF president Ken Nedimyer.

A few years ago, the foundation planted a few thousand corals per year. Now they have 500 underwater trees in Florida that are growing 40,000-50,000 corals at any one time, he says.

For those who want special training, the Professional Association of Diving Instructors (PADI) offers courses and certifications in coral reef restoration.

Scuba divers must be aged 14 or older, and must be able to control their buoyancy underwater so as not to harm the reefs, says Patti Gross, a master diving instructor with PADI who says she has certified around 250 people in coral restoration in the past four years.

“This is way harder than it appears on land,” she says.

“But it is very rewarding in the end.”