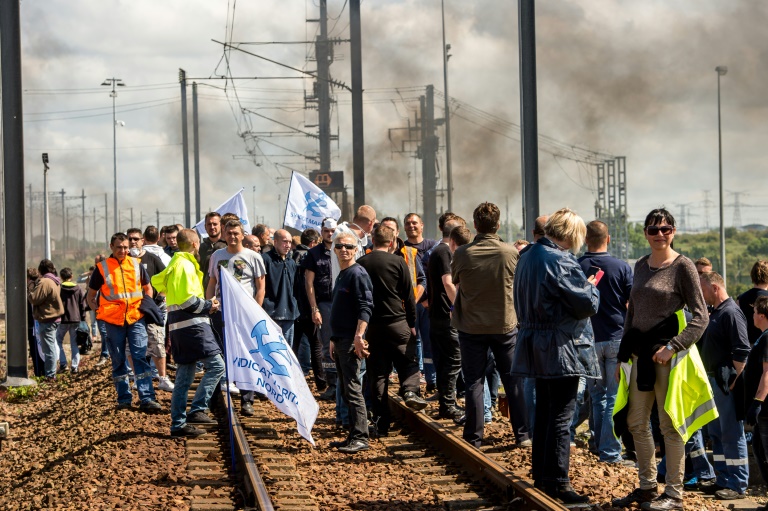 Protesting French sailors halted Eurostar trains for several hours Tuesday by again blocking entry to the Channel Tunnel in Calais, with migrants using the opportunity to try to break into stationary vehicles.

Around 30 sailors from the French company MyFerryLink burned tyres on the tracks around 300 metres from the entry to the undersea tunnel linking France and Britain and tried to dismantle the rails in their third such protest at the Calais port in a week.

The workers were protesting plans to sell off their cross-channel ferries to rival Danish firm DFDS, expected to result in hundreds of job losses.

Eurostar trains between France and Britain were cancelled for several hours “following the fire caused by MyFerryLink demonstrators outside the tunnel”, the company said in a statement on its website.

Local authorities said there had been attempts by some of the thousands of migrants camped out around the port in Calais to break into lorries, in a repeat of dramatic scenes captured on camera last week.

The migrants, whose presence has long caused friction between London and Paris, go to dramatic lengths to smuggle themselves into Britain, and have even been recorded trying to swim across the Channel.

“We have registered break-in attempts by migrants this morning at the Eurotunnel site,” said a spokesman for the local council.

The ferry workers also blocked the port on Monday.

The tunnel is used for drivers travelling between Britain and France, whose cars are transported on special trains, as well as for Eurostar passenger train services.

Eurotunnel — which operates the Channel Tunnel — announced in May it was halting its operational partnership with MyFerryLink due to legal complications, and this month decided to sell its ferries to DFDS.

The Danish ferry operator has said it plans to provide work for only 202 of the current 600 MyFerryLink workers.

The sale of the two ferries would leave MyFerryLink with just one boat in operation, meaning over half the workforce faces redundancy.