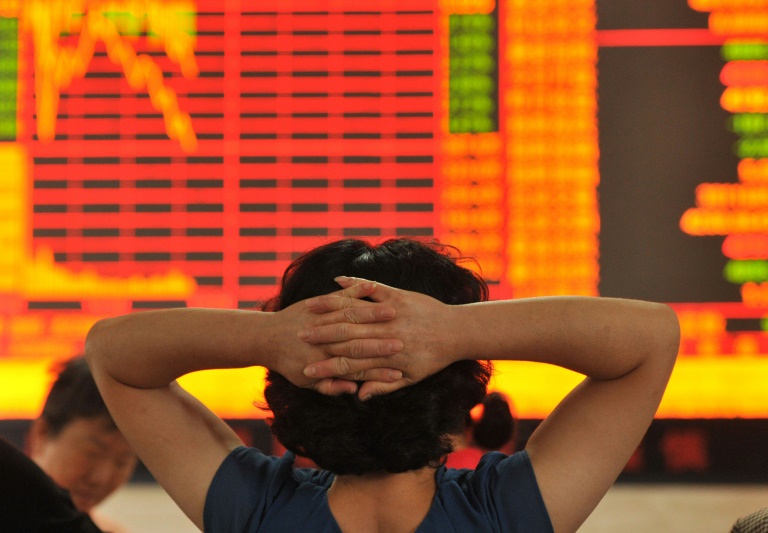 Asian markets rebounded Tuesday after the previous day’s rout fuelled by concerns about Greece’s future in the eurozone while Shanghai surged at the end of a volatile day that saw wild swings.

The euro edged down and analysts warned of sharp movements this week as Greece prepares for a Sunday referendum on creditors’ bailout reform proposals, which European leaders say boils down to an in/out vote on the eurozone.

Shanghai’s roller-coaster ride continued, plunging more than 5.1 percent in the morning before bouncing back as bargain-buyers moved in after a recent hefty sell-off. The composite index closed 5.53 percent higher — its best daily gain in six years — adding 224.19 points to 4,277.22.

Mainland Chinese markets are swinging wildly after collapsing more than 20 percent over the past two weeks and analysts flagged more sharp movements in future.

The Greek crisis sent markets tumbling across Europe and in New York on Monday.

The euro ended Monday higher but was down on Tuesday.

However, Matthew Sherwood, head of investment markets research in Sydney at Perpetual Ltd, wrote to clients: “Right now the biggest surprise is that the euro is not materially weaker.”

“Market expectations are that the Greek situation is manageable even if they exit the union,” he said.

With Greece’s bailout talks completely broken down after Prime Minister Alexis Tsipras called the July 5 plebiscite, the country is widely expected to miss its payment to the IMF due later Tuesday, leaving it in default.

But Sunday’s poll is now key to the country’s eurozone future, with top European leaders including Germany’s Angela Merkel, France’s Francois Hollande and Italy’s Matteo Renzi urging the Greek people to vote for the creditors’ proposals.

“A ‘No’ would mean, regardless of the question posed, that Greece had said no to Europe,” said European Commission chief Jean-Claude Juncker.

“The political timetable is now unclear due to the surprise of the referendum. We do not know the wording of the question or the questions that will be asked, and so the outcome risks creating even more uncertainty,” David Gaud, a senior fund manager at Edmond de Rothschild in Hong Kong, told AFP.

“The next big deadline is the payment expected on July 20 — to the ECB this time. With the IMF payment already outstanding, the coming month will remain very volatile”.

In Shanghai dealers bought on the dip after heavy morning selling. The index lost more than three percent Monday, putting it in a bear market and economists warned of further losses as retail investors cash up and margin trades are called in.

The exchange had run up gains of 150 percent in the year to June 12, before profit-takers moved in and authorities started tightening rules on margin trading, in which dealers borrow cash to invest.

In a bid to protect the stock market, China’s central bank at the weekend cut interest rates for the fourth time since November and also lowered the amount of cash lenders must keep in reserve.

Speculation is also swirling that officials plan to halt initial public offerings often blamed for sucking up cash from markets.

“No one can tell for sure where the market’s bottom is,” said Castor Pang, head of research at Core Pacific-Yamaichi in Hong Kong.

“The government will need to take more measures to stop the market’s freefall,” Pang said.

“Positive effects from the rate cut, as well as news of pension fund planning to enter the stock market, have started to kick in to support the market.”

On oil markets US benchmark West Texas Intermediate (WTI) for August delivery added 12 cents to $58.45 while Brent crude for August rose 38 cents to $62.39 in afternoon trade.

— Bloomberg News contributed to this story —