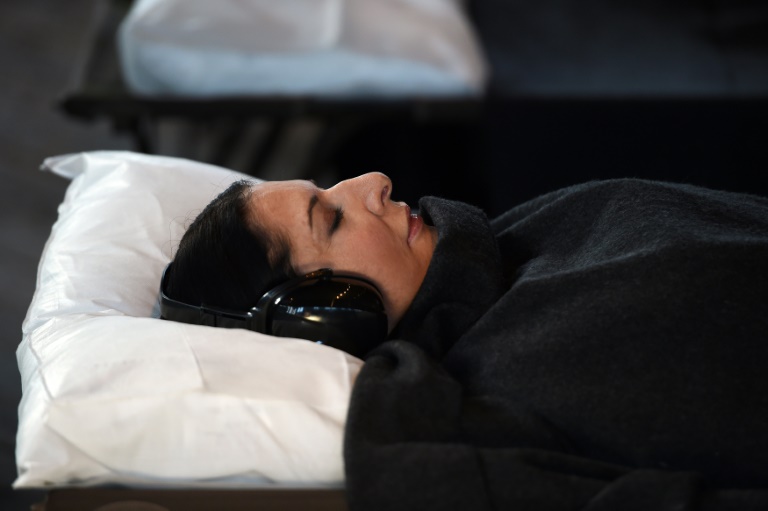 Performance artist Marina Abramovic is known for putting her body on the line — from cutting herself, to walking thousands of kilometres along China’s Great Wall, to having a loaded gun pointed at her head.

The charismatic Belgrade-born art pioneer counts celebrities such as pop star Lady Gaga among her fans, while her performances attract people in the thousands.

But for all her current fame, Abramovic credits the months spent in quiet remote Australian Aboriginal communities in the 1980s as being one of the major influences on her life’s work.

“This really changes our lives, connection with this kind of people,” Abramovic explains to AFP of the time she spent with her then partner, German artist Frank Uwe Laysiepen, known as Ulay, in the central Australian desert regions.

They lived for close to a year in Australia, mostly with the Pintupi and Pitjantjatjara tribes near the giant red monolith Uluru and in big Outback cattle stations.

The Aboriginal “idea of here and now; that everything is happening in the present time” struck a chord with Abramovic, who reached for the same experience in her art.

It ultimately helped her develop the thinking behind her 2010 blockbuster New York performance called “The Artist is Present”, in which she sat silent and immobile for seven hours a day, six days a week for three months.

“So they knew, that actually in life, the only thing we can rely on is the present because the past already happened, and the future didn’t. And you don’t know what’s the future. Next second we can all be dead.”

– Every human being can kill –

Abramovic tempted death during her 1974 performance “Rhythm Zero” in Naples in which gallery visitors were invited to treat her as an object, similar to those she had laid out before them, including a feather, rose, bullet and pistol.

The six-hour experience began tamely, but by the end Abramovic was bloodied and near naked, with the audience having taken off her clothes, put a loaded gun to her head, cut her neck and written on her body.

“What I learn is this, that every single human being can kill another human being,” Abramovic says from Sydney where she has created a series of spaces to engage visitors as part of the Kaldor Public Art Project.

Abramovic says she has experienced both the best and worst of humankind in her work, with a highlight being “The Artist Is Present” five years ago.

In this 700-hour endurance test Abramovic sat silently projecting unconditional love to whoever was in front of her at New York’s Museum of Modern Art. Thousands turned up, many people cried.

“They are sitting in front of me, they are photographed, they are filmed, they are watched by me, they have nowhere to escape except within themselves,” she explains of her visitors.

“And when this happens… emotions come up and this is what I wanted to provoke in them.”

The performance required incredible discipline and concentration from Abramovic.

“Cutting the body … was easy” because the performance only lasts an hour, she says, referencing work which includes carving a star into her abdomen in the 1970s — though, she adds, “you can recover (in) three months”.

“But what about sitting for three months? That’s so much more difficult because you have to deal with your mind.

“If you don’t move for three hours, your ribs are going into your organs because you are sinking slowly on the chair. It’s just incredibly painful.”

Belgrade-born Abramovic says as she nears 70, she wants to keep going with her work, which is moving away from pure physical performance to having a more mental discipline.

She advocates practices such as carefully counting the number of grains of rice in a bag or writing one’s name so slowly the whole process takes an hour to heighten consciousness.

“The main thing is we should do things that we don’t like, that we’re afraid of,” she says, smiling at the suggestion these things are impossible.

In her Sydney work “Marina Abramovic: In Residence”, she is exploring how she can transfer such experiences to the public by becoming a “conductor” in the exhibition space, challenging visitors to change the way they look at art.

The New York-based artist will also mentor 12 young Australian artists, giving them the assistance she herself never received during her more than 40, often lonely, years as a performance artist.

“No men want to be with you because you are just too much or not marriage material … no children, because I didn’t want to have them because I wanted to put all my energy into art,” she says.

“It’s a very hard choice to make but I did it very rationally and I’m not sorry for one second. I’m going to work till I die.”